I meet up with my friend Morgan again today, this time in Siena.

“This place,” she says, her eyes wide, when she comes to get me at the train station. My eyes widen, too, when we walk up to its walls. Siena is a fantasy film set. It should have a Instagram filter named after it. Except it doesn’t need an Instagram filter.

We visit the otherworldly black and white duomo, and the vast piazza, where families and dogs and couples spread out over the cobblestones, taking it all in and eating gelato. 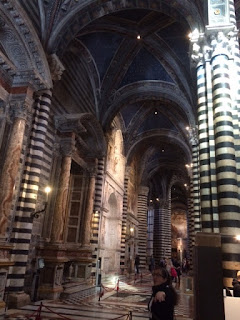 We go for lunch to a restaurant which has no menu – they just tell you what they got, and you say yay or nay. As we take our seats, the waitress asks, "Red or white?" Who are we to disappoint? We drink more chianti and eat UFO-sized raviolis. Then, obviously, we go for gelato.

Rolling along afterwards, we hear the sounds of a marching band, so we follow them. We turn a corner to find bunch of kids in full medieval outfits (right down to the shoes, obvs,) beating drums and doing some kind of ancient flag sport dance. We just look at them and look at each other, like, what is this life? Have we walked into a Fellini film? How do people just, like, live in Siena? 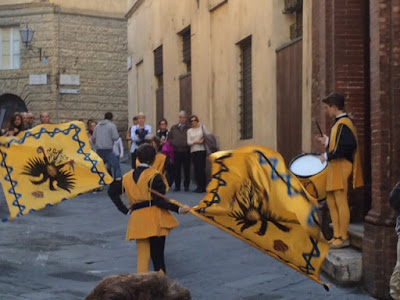 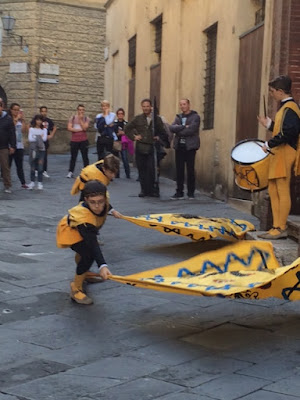 Later, Morgan leaves to rejoin her mum and aunt, and I wander back through the piazza and check out a few more spots, and gawk at the sky. Magic hour here is like, I don’t know, magic hour times a thousand. Blogging about Italy every day, you sort of run out of words. 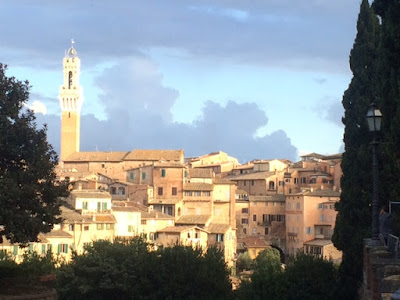 I have loved catching up with some of my favourite people on this trip, just as much as I’ve loved being on my own. The more time that passes, the more content I am doing my own thing. But after saying goodbye to Morgan today, I have to admit, I feel a little down. Maybe more than a little. Watching all families and couples and dogs, I feel like an island in a way I haven’t in a long time.

The three hour train ride home gives me a lot of time to think. I know I could just get on Tinder and go out on some date with some Italian. Part of me wants to, just so I can talk about the time in Florence I met some Vespa-riding dude named Octavio. But I also know that tonight, I would be doing it just for the sake of doing it. That what I’m missing is not small talk with a stranger. Also, Tinder is lame. But I’ll rant about that some other time.

What I’m missing today is being the centre of someone’s world, and having someone at the centre of mine. I wish this weren’t the case. I wish I could be the kind of unshakable single woman who is 100% glowing to be on her own, 100% of the time.

I know that relationships start somewhere – they don’t just spring into existence, fully formed. And that’s it, really. I’m not ready to start. There's more of this island stuff to be done. Most days, it truly is better than ravioli and medieval towns. And some days, it still kind of sucks.