You had never been on an Internet date before.

There. You’ve said it.

The opportunity just never presented itself. And now, ironically, at the age of phmphthtwsomlet’snotgothere, you are living with your dad. It’s like high school all over again.

But with the Internet.

The thing about Internet dating that freaks you out is the loadedness of it all. When you meet someone “the old-fashioned way” (you can’t believe you are even writing those words,) you have a reasonable idea whether you want to spend any more time with them, and whether that time might lead to other kinds of time. When you meet someone after considering their photograph and profile with less focus than you would a pair of shoes, then agree meet them face-to-face, you’ve already kind of declared that that might lead to other kinds of time. But what if it doesn’t? That doesn’t sit well with an introvert like you. However, you are also one to grab a challenge by the balls (wrong choice of words, probably) and so, after a few weeks in Turkey, you start chatting with a man on Tinder who seems like a decent dude, and has nice eyes, and does humanitarian work. He is in town for one evening with colleagues. He is polite and friendly and does not sound like a serial killer. You agree to meet him at the restaurant down the street.

Your hair in its current state would scare off a wild animal, much less a potential suitor, and you have run out of conditioner, so you nip off to the corner store to buy some.

Except that this is Turkey.

The small selection of shampoo-like bottles are all labeled in (surprise) Turkish. You start frantically entering words into your translator app, and learn that every single bottle is, in fact, shampoo, aside from one which according to your translator, contains “feeding shit.” Panicked, you search until you find a tiny bottle that translates to “nourish cream.” You say a quick prayer, because to wash your hair and not condition it would scare off a whole herd of wild animals, grab a cheap razor (they’re all the same, right?) and dash home, fingers crossed. 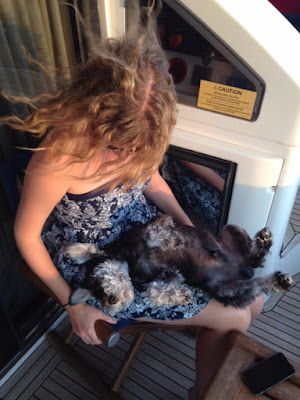 This is why I need to condition.
Praise the gods: it is conditioner. Your hair is smooth(ish) and untangled. But the cheap razor doubles as a tiny machete.

You find you have cut your legs in no less than 6 places, and then realize that none of your clean washing has dried. You have no bandaids in the house, either. And so, you find yourself sat on the closed toilet, hanging your bleeding legs over the shower, while blow drying a pair of underwear.

Your phone buzzes: it’s your date, telling you he is at the restaurant, even though he was supposed to text you before he left. You put the phone down on the toilet lid, and then realize you have placed it in a shallow pool of water. You leap up to dry it, and spray blood all over the tiles.

And they say glamour is dead.

You get dressed in your one date-worthy outfit. But what in your head seemed like a casual chic ensemble, a sort of “oh I just rolled out of bed looking like this” boho stylish look, looks, well, weird. Mismatched. Not right. And in need of heels, which you do not have.

But you also have no other options. Which is kind of liberating.

Your phone rings, and you leap to answer it. It is the car rental guy, calling about tomorrow’s rental. You realize your heart is hammering. This is ridiculous. You would so much rather spend tonight on the couch with Game of Thrones and cheesecake.

As you’re leaving, you text your dad – like high school, except with cell phones.

“Have fun, Sweetie,” your dad replies. “Take the pepper spray.”

As you walk to the bar, your phone buzzes again. It is your Tinder date, this time, checking to see if you got lost. (He doesn’t realize that you have chosen this bar specifically because it is 3 minutes away by foot.) He adds that he hopes it’s okay that a couple of his colleagues showed up. They were keen for a night out and he had told him where you’d be meeting.

It is more than okay. It is a giant relief.

You join their table. They are all gentlemen, and the four of you spend the next couple of hours drinking wine, laughing, trading travel stories and talking about Turkish politics. You learn things, your heart rate remains steady, and you end the evening having made at least one new friend. Who may or may not be gay, but hey, who's counting?

You walk home alone, feeling proud. You’ve done it. You are no longer a Tinder virgin. And the rest will come, maybe, with time.
Labels: dad, dating, introvert, Tinder, travel, Turkey