We are in Pamukkale

Which is the closest to being on another planet

There are these travertines – which I think sound like the name of a band – made of white salt, and pools in them of cool aqua blue therapeutic water, which they say heal what ails you. 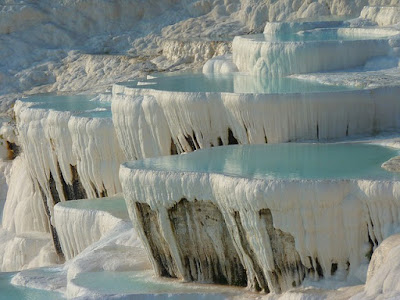 There are red thermal baths of hot spring water, with even more healing properties.

And flat fields in between the two, and mountains all around.

And there is the ancient city of Hieropolis, another ancient Greco-Roman city of columns and majesty. 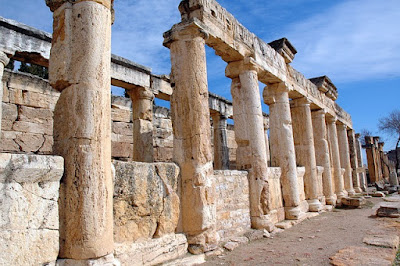 It’s all so weird and otherworldly, that I keep feeling like any minute now, Jon Snow is going to emerge onto the side of the road in his fur cape. Maybe if I think about it enough, it’ll happen.

But we didn’t see any of it today. (Not even Jon Snow.)

Last night, poor Tegan was up at all hours spewing in the bathroom. Of our shared room. And as some of you know, I don’t really do well with spewing, so I was up, too.

She spewed and I stewed, worrying about her and today and what if she needed a doctor and what if it was contagious, sometimes asking if she was okay and other times covering my ears, which does not seem like the kind of thing a grownup should do.

Finally, after the sun came up, we both slept.

And today, we went to some pools where they made everyone wear funny bathing caps

And sat in the red thermal water

And being grateful it was just food poisoning.

That we can be back on our adventures tomorrow

But that we both had no problem