At a swanky restaurant overlooking the sea, Tegan and I meet the most enthusiastic waiter in the history of all waiters. When he brings us dessert, he actually offers to scoop the ice cream onto the brownie for us. Before that, when I ask him if we’ll be getting Turkish bread with our appetizer, he practically wets himself with assurances.

“The fluffy bread!” he announces, when the appetizers are delivered, and from then on, we, too, refer to it as it fluffy bread, and rate all fluffy breads against each other.

“This fluffy bread is less fluffy than last night’s,” we’ll comment, or, “This may be the best fluffy bread yet.” Today at lunch, after paying the bill, we steal a couple of pieces of uneaten fluffy bread, surreptitiously wrap them in a napkin, and make for the car.

“Wait!” the waiter calls after us, and we turn around, guiltily.

He hands us a plastic bag, points at the bread, and winks.

We visit Artemis’s Temple, near Ephesus. Artemis, you’ll be interested to know, is the goddess of the wilderness, wild animals, and childbirth, among other things. Her temple hasn’t been nearly as well kept as Ephesus or the Temple of Apollo, and could generously be described as a field full of rocks and broken columns. Still, I spend an hour there, sitting amongst the overgrown ruins, trying to imagine what it must have been like back in the day. 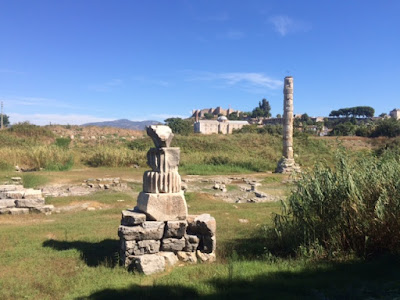 Then we drive through mountains and valleys to Aphrodisias, an ancient city dedicated to – you guessed it – Aphrodite. It is stunning, and we have it almost completely to ourselves. I keep trying to wrap my head around the fact that real, live people lived here once upon a time, walking these streets, buying and selling stuff, arguing and making up. I touch stone amphitheater seats and wonder about their heartbreaks, their stories, what kept them up at night. Was small talk a thing back then? Did they fall in love, too? Or were they smarter than that?

But I’m a sucker for ancient places. When I was a kid, my dad took me to see all the Indiana Jones movies (along with all the Star Wars movies, and any other adventure film that was playing on a Sunday.) I still fantasize that I will lean against a rock in one of these cities or temples, and it will move and I will discover a hidden passageway to a secret underground chamber. I can’t believe I’m admitting this publicly, but it’s almost midnight and I’ve had wine, so there you have it. 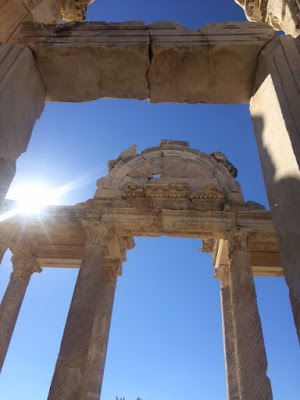 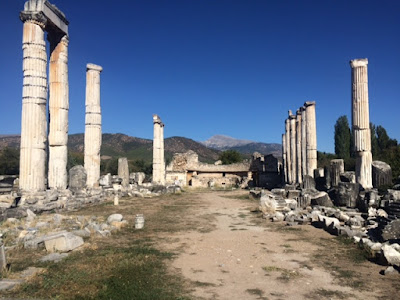 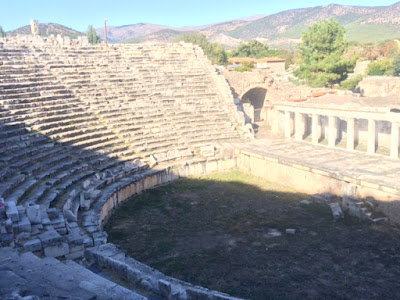 I’ve been traveling for about two years, now. Most of that has been in hot weather, and so my summer gear is getting… worn in. To put it lightly.

This was fine in Bali, where cut-off jean shorts and a faded tank top are more or less considered black tie. And since I work at home, as long as I have a shirt on, I can generally get by. But here in Turkey, I’m starting to feel like a bum. I keep snatching glimpses of my reflection and noticing how faded, or stretched, or, ahem, shrunken my clothes are looking. Also, my underwear: forget about it. I’m down to a few special occasion pairs. Fortunately, there aren’t too many special occasions to be had in Turkey.

I am reading aloud to Tegan about Artemis. She loves it when I do that.

“It’s cool, but it’s also weird that we think it’s cool, when they would just have thought it was normal.”

This is why we are friends.

I begin to think about femininity. I realize I’d never considered it as a separate entity, but always the opposite or complement of masculinity. What is femininity, on its own? Sexiness? Sultriness? Curviness? Artemis’s peeps didn’t think so. They thought it meant being able to shoot a bow and arrow, and deliver babies. And the female statues we saw at Aphrodisias showed women as solid, strong and powerful.

As we make our way out of the museum, I check out my reflection a window one more time. My tank top is faded. My bra… well, let’s not go there. And I have clearly had my share of fluffy bread.

Then I look outside, at the temples and sarcophagi and pillars, and think of the little kid running out of those Indiana Jones movies, promising herself that one day, she would travel the world, explore ancient cities, and drive through mountains. She would do it with an equally cool friend by her side. And she wouldn't give a shit how faded her clothes were. And that, to her, was as feminine as anything.

And we climb back into the car and make our way towards the next adventure, while devouring the last of the fluffy bread.