We are in the parking lot of Ephesus, one of the wonders of the ancient world, and Tegan is holding me over the side of a dumpster.

“I CAN’T DO THIS IF YOU KEEP MAKING ME LAUGH!”  I shout, as she struggles to heave me higher so I can reach lower and try not to fall in. I’ve just thrown away some food we’d left in the car overnight that had gone off, and of course I didn’t look in the bag, and of course I also threw out our corkscrew. And there’s no way we’re going without that. My fingers finally grab it, and I emerge, victorious.

“Glad we got that sorted,” Tegan says, as if it were the sort of thing she does every day.

I nod and dust off my shirt, and we deposit the corkscrew in the car, glide over to the gates, and ignore the giggling group of police officers who have just watched this scene unfold.

To describe Tegan, I tell the story of when we went apartment hunting in London, 10 years ago. All my life, I had dreamed of living in an attic flat in London. We went to see a place we’d found online, simply described as a two-bedroom. When we asked where the second bedroom was, the landlord pointed to a narrow set of stairs leading to an attic. Once up there, under the sloped ceilings and window up to the stars, I began leaping around like a 4-year old on methamphetamines.

“Stay here,” Tegan hissed, marched back downstairs, told the landlord the place okay but we’d seen better, and negotiated the rental down by a hundred pounds.

She was 21 years old at the time. 7 years younger than me.

She still is 7 years younger than me, and still like the older sister. I joke that, combined, we make the perfect woman. Tegan does not do things like take 45 minutes to choose dessert, or cuddle strange dogs, or forget where we parked the car. She also does not go night swimming to be in the sparkling phosphorous water (“there might be crawly things.”) Nor is she a walking Lonely Planet guidebook, or a walking Greek mythology encyclopedia, spouting the background facts on each god, goddess and mystical symbol we encounter on our travels.

“The snake represents healing and femininity,” I inform earlier today, at Ephesus.

“Hmmm!” she says, because she’s polite enough to pretend that she cares.

She did, however, quiz the parking lot attendant, post-dumpster-incident, to make sure he was legit, whereas I would have happily handed over the money and car keys without thinking. 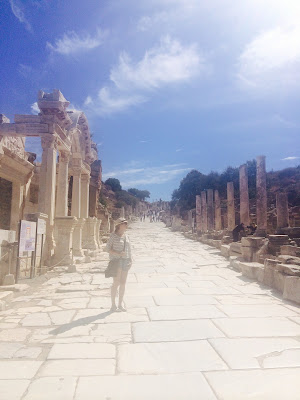 I don’t often tell the whole story about how Tegan and I met. It was in a hostel dorm room in Athens, 11 years ago. I had just had one of the most horrific experiences a female traveler can have. I don’t feel like going into it here, but those of you who don’t know can probably guess.

I felt more alone and terrified that night than I have the capacity to describe. I’ve never been a religious person, but after nearly 48 hours of being awake, that night, in Athens, I prayed for help. I didn’t know what that even meant. I just knew that, without it, I would crumble.

When I woke up, there a curvy blonde on the bunk across from me, digging through a mound of flowery skirts. By then, my story had circulated through the hostel, and I knew she knew what had happened. Most people would have pretended not to, though, or at least changed the subject. Tegan introduced herself, looked me straight in the face and said,

“I’m sorry about what happened to you. Is there anything I can do?”

I’ve thought back to that day more than a few times, having her here with me in Turkey, over a decade later. We are both older and wiser now.  But there are few things in life for which I am more grateful than this friendship, which has lasted over oceans and years apart, and brought us together again on this side of the world, me dropping corkscrews in dumpsters, her helping me fish them out. 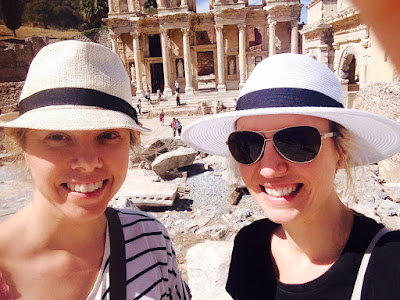