Ask me about my happy place, and normally, I'd give you two words: “road trip.” The freedom to travel autonomously with great tunes and all-day permission to eat junk food, is, to me, the very definition of joy. But a few weeks ago, as I drove a beat-up rental car through northern New Zealand, I felt the opposite of that.

I felt down. Sub-basement down. The reasons why are not important, although of course they were important to me. I felt lonely, angry and jealous. Also, I felt stupid.

Most visitors to NZ tend to concentrate on Auckland and anything south of it, so the Northlands are, essentially, empty. (Aside from Germans, but that’s just a given.) I was surrounded by tropical forests and white sand beaches. At home, people I loved were sick. People I loved loved people who were dying. People around the world were suffering in ways I couldn’t imagine. And here I was, no desk job, no mortgage, as obligation-free as you can get, in the middle of one of the most beautiful places in the world... up to my eyeballs in misery.

If you’ve ever been really down, you might know this: at times like these, logic does not apply.

Here is the kind of conversation I would have with myself:

“Look at you. You’re totally missing that sunset. Don’t you know how lucky you are? Except for this shitty car. A person doing life properly would have a proper car that at least had radio reception. Plus, their destination would be some nice, country cottage B&B. Who stays at a hostel? Not someone doing life properly. Now you’re going to have to make small talk, and share your sleeping space with strangers. Which you’re not a fan of at the best of times, and this, clearly, is not the best of times. Could this car go any slower? You’re stopping for ice cream again?”

I arrived at the hostel - which was also a B&B. The owner greeted me, introduced me to the four other guests (two of them German,) and brought me to a private, country cottage room, with a double bed and huge windows looking out onto rolling hills and a sacred Maori cliff.

“Since there’s almost no one here,” she said, “I thought I’d give you a room to yourself.”

If life were like the movies, this is where things would have started to get better. I hiked and meditated and swam on beaches with no one on them. I ate good food and drove along winding roads through the greenest green. I even met up with a friend of a friend who happened to be camping at a nearby beach. Through most of it, I switched up feeling awful, and feeling awful about feeling awful. That’s the thing about being in a pit: you can’t really see what’s around you. You just know it’s dark, uncomfortable, and hard to breathe. You know you’d like to climb out, but you’ve forgotten how. Sure, I had moments of clarity. But in minutes or hours, I’d lose my footing and sink back down again, seemingly even lower than before. 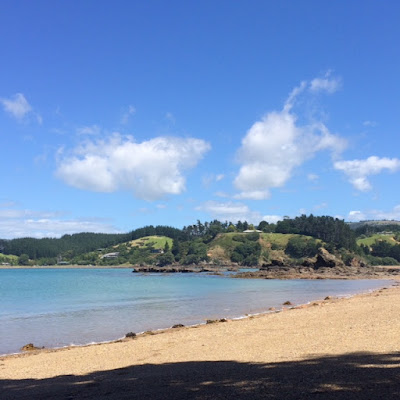 "Natalie Beach" (for one afternoon)

I traveled on. I went camping. I thought I would be like Cheryl Strayed in Wild, and come to some great revelation about my life. Here’s a tip: people may hike the Pacific Crest Trail alone. People do not camp in campgrounds alone. Not even Germans. 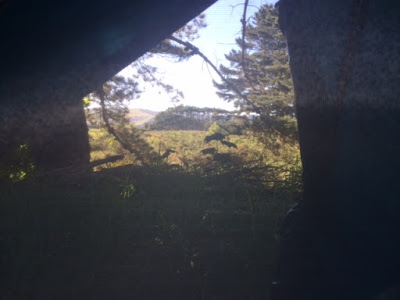 Tent with a view - Ahipara, NZ

Happy couples and groups of friends and families barbequed and drank wine around me while I Googled how to set up a 2-man (should be called 2-man-if-both-men-are-4-foot-8-and-missing-limbs) tent. I drove to the northernmost point of New Zealand, where the Tasman Sea and the Pacific Ocean meet, and where the Moari say their spirits pass through when they die. Even from my face-in-the-dirt vantage point, it was jaw-dropping. I walked and sat and stared, trying not to think about other times I'd seen amazing places, and the people I was with, and what they'd say if they were here, and how they weren’t here because of things I’d done and they’d done and we’d done, and how badly I sucked at being alone. 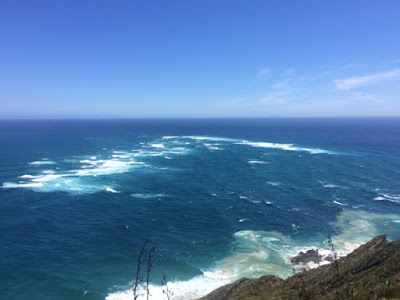 
On my last night, I camped at a site near-ish to the city. I set up the tent, and went for a swim.

When I returned, the campsite was teeming with families - and every single one of which seemed to know each other. A couple had set up a tent so close to mine I could hear them breathing in the night. At 4:45am, I woke up tangled up in my sleeping bag, my head wedged into one corner of the tent, filled with loathing. All these people, blissfully tucked away in their luxury marquees together, dreaming of hot dogs and sun and surf? They had done life properly. They had security, happiness and love. They had all the things I’d gone traveling in search for and still hadn’t found.

By the time I left that morning, I might as well have had smoke billowing out of my ears. As I shoved my belongings back into the car, sleep-deprived, sore and scaring small children with the scowl on my face, I just gave up. My anger might have been unjustified, but I couldn't fight it anymore. My loneliness was probably immature, but I didn’t have the energy to care. I was jealous. I was hurting. It was embarrassing, and juvenile, and I’d run out of steam.

Recently, someone sent me this video.

As I drove back to the car rental place, I imagined my emotions as those puppies. I thought about what I'd say to them as they crawled all over me. It certainly wasn’t, “Suck it up and stop your bitching.”

So what would I do?

I’d hold them. I'd cuddle them.

I’d probably talk to them.

“Puppies,” I said. “Your hurt and sadness might be out of proportion with your life circumstances, but that does not mean you're not in pain. Let’s hang out together in this shitty rental car for a while and see what happens.”

We hung out for the rest of the drive. I brought them onto the car rental shuttle. I carried them onto the Skybus back to Auckland, and held them as we looked out the window at the city. They still whimpered. I patted them and told them I was here. And sometime before I stood up to get off the bus, I noticed the puppies were gone.

They didn't leave for good, I must point out. Not for more than a day, really. But they have started to visit less and less. When they do, I try to treat them with kindness. I once read that depression is not sadness, but the depression of sadness – or loneliness, or shame, or anger, or whatever it is we don’t want to feel. It’s beating those puppies down like Whack-a-Moles. And the more you push them down, the harder they fight to be seen, even though in the moment, it feels as though they’re going to eat you alive.

Some outward changes have also helped. I’ve started to say no, even when I feel like I’m letting someone down. I’ve been more honest about not being in a good place.

Which is why I’m writing this. It’s not for sympathy - which does not help. (Nor does “Think positive!” or, “Just look at how lucky you are! How’s the weather over there?”) I’m writing this because when I’ve been honest about being the pit, people have come out of the woodwork with their own stories. They’ve said things like, “I’ve been there, too,” or, “I’m here if you need me.” That has helped.

So if you’re in a pit right now, please remember: your pain or fear or hurt or anger might be out of proportion with your life circumstances, but that’s not going to make it go away. Logic does not apply. This is only my experience, of course, but from what I’ve heard, it’s true for many.