I have to come clean about one of the reasons I came to New Zealand.

Usually, I say that I fell in love with the people here. That is true. Also, the jaw-dropping beauty around every corner, and the laidback pace of life. The fact that Kiwis  go to the mall barefoot, still use landlines and have tea breaks. Lots of tea breaks. I think you see what I'm getting at.

But also, I came here for a meditation teacher.

I know. Spark up the patchouli. Call Elizabeth Gilbert.

I’ve been meditating for a few years now, and for most of that time I saw it as a way to calm my mind. Meditation was the first pathway I found through what Anne Lamott calls Radio KFKD – that mental channel which loudly and regularly reminds me that I'm getting it wrong, that other people do it so much better, and that I might as well not bother. But as time went on, I learned that the study of meditation and mindfulness also involves developing compassion for myself and others. It's an extremely accepting community where people look out for each other, and try to make a difference in what seems like a rapidly unraveling world. The more involved I got, the more I realized I needed all of that to be part of my life.

I met my teacher when I was in New Zealand last year. She is a down-to-earth, city-dwelling, sometimes-mojito-drinking working mother, and I was drawn to her right away. I spent two weeks living at her house, which felt like the equivalent of 7 years of therapy, and came out a changed person. She’s also trying to make mindfulness and meditation more accessible to the general population, effectively taking the scariness out of it and bringing it to the stressed, the neurotic, the overwhelmed - and the folks who don't normally have access to this kind of support.

Obviously, I had to come back.

I have done this through luck and fate, and joining a housesitting website. Housesitting is a great thing for travel: you can stay in someone's home for a few days or a few months in exchange for caring for their pets, and sometimes their lawns or gardens. This especially handy in New Zealand, where food and fuel are exorbitant.

My charges are two cats and a rabbit. The cats are super well behaved, and inform me that it’s time for breakfast by having purr-ins on the bedroom floor. The rabbit, whom we’ll call Rocky to protect his identity, is twelve, which is apparently like 160 in rabbit years. His owners casually mentioned that he might die while they’re away.

“They even showed me where to bury him!” I told the neighbor.

I am starting to like Rocky more and more. One of his ears sticks up and other lies flat. He’s smaller than a football, and so soft. When I bring him his sliced pears for dinner, he gets up on his hind legs and wiggles his little nose through the bars of his cage. He is also a renegade, which is why I spend many an afternoon on my stomach in the dirt, coaxing him out from underneath the porch so I can bring him inside for the night.

I tried to get him to hang out with me and the cats, but he indicated his thoughts on this matter by leaving a tiny poo on the carpet, hopping down the stairs and waiting for me to let him into the garage, where he sleeps.

The house I’m sitting is in Hamilton. If you don’t know New Zealand, that might evoke images of long sandy beaches, or Mount Doom, or two nerdy guys playing guitars. Well, I'm sorry. Hamilton, population approximately 150,000 and inland, is very, very quiet. So quiet. I drive down the main street on Friday night just to see where the people are going. There are no people. I google “what to do in Hamilton” and find something called a Rabbit Show, which I assume involves burlesque. It is, in fact, a rabbit show. For people who have rabbits. Admission is free.

It’s almost impossible to get around New Zealand without a car, especially going back and forth to Auckland, where my teacher lives and where things do happen on Friday nights. Because everything is still so up in the air with my visa, I've rented one from a cheapo used car place. It’s a Toyota Vitz, whom, naturally, I call Fritz. Fritz is wine-coloured and has a tape player. When I floor it going up a hill, he might hit 83. On the winding roads of NZ, driving a properly functioning vehicle feels like sex on wheels, so I feel for the people behind me. I keep wondering if I should get a bumper sticker that reads, “My car doesn’t actually go any faster than this.”

Part of the study of meditation is the idea that all we have is the present moment. Which we’ve all heard a thousand times, and is a hell of a lot easier said than done. Before leaving Canada, packing and slogging through paperwork and what felt like bottomless grief, I kept catching myself believing that I just had to get over here and life would really begin. Even though I’ve thought that same thing so many times, about so many trips, life changes and ordeals.

Before arriving in NZ, I spent two weeks in Australia with some of my favourite people on earth. It was so total, gleeful, top of the world fun – the kind of fun I hadn’t had in, well, possibly ever. I’d be having a picnic on a beach at sunset, or spotting a koala bear in a tree, or jumping on a trampoline under the stars – oh, the stars in Australia! – and think, “This is my life,” and nearly drown in gratitude. 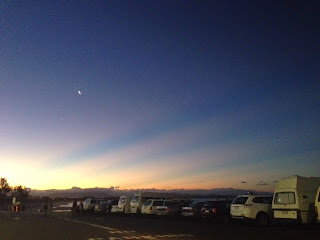 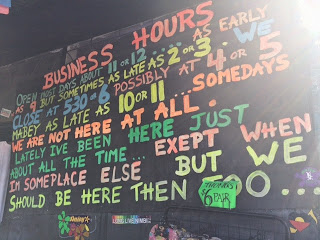 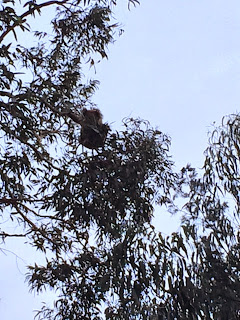 First ever koala sighting. Him: continue eating. Me: pee my pants.

Now, in Hamilton, I fall back into it the old habit: thinking that this isn’t life, but some kind of intermission. I’ll be standing in front of a jar of almond butter at the supermarket, calculating whether it would be cheaper to buy it or just fly home and get one there; or I'll consider how many friends I have here (two) and how far away I am from most of the people I love, and how hard it's going to be for me to stay here if that's what I decide to do. I’ll walk around this house, looking at the photos of babies and kids, the artifacts of a family history, the little magnets that say things like, “I made a wish and you came true.” And I’ll remember that life has begun. It’s ticking along, right this second. It’s just up to me what I’m going to do with it.

I hate it when that happens.

One of the first things I did when I got to Hamilton was find a pool. If you’re a regular swimmer, you know that learning your way around a new pool is disconcerting, like a dream: figuring out change room geography and lockers and showers, all while mostly naked.

“Is it busy today?” I asked the guy at the counter, when I arrived.

I looked over his shoulder through the indoor window. There were four lanes open, and two people doing laps.

When I got to the change room, a small blonde girl bounded out from a cubicle.

“Hi!” she shouted, as if she’d been waiting for me for years. "I like your shoes!"

Later, reeking comfortingly of chlorine, I drove Fritz home under the watercolour evening sky, relieved to find Rocky very much alive and awaiting his pear slices. We’re on a dead end street in the suburbs, so by 7 o’clock it is utterly silent. I lit a fire, and the cats joined me on the couch, one on either side, like purring bookends. I had some gummy worms and we watched a bad movie together.

When I got up to go to bed, they stayed by the embers, curled into little furry balls of contentedness.
Labels: divorce, Hamilton, meditation, mindfulness, New Zealand, rabbit, separation, travel