The Old and the Young

You didn’t want to be home for Christmas.

Lordy, did you not. You spent one Christmas abroad - a guy you were dating in the UK invited you to stay with his folks - and gosh darned if it wasn’t the best. His parents showered you with love, cheese plates and gin. His mother cooked a spread worthy of an oil painting. There was no arguing, no resentment, no tension over an uncle drinking too much or a brother sneaking out back for a joint. You spent the afternoon at a pub on the beach, sipping cider in the sunshine, wearing nothing but a sweater (well, and pants,) wondering why, exactly, you’d ever spend Christmas with your own family again. 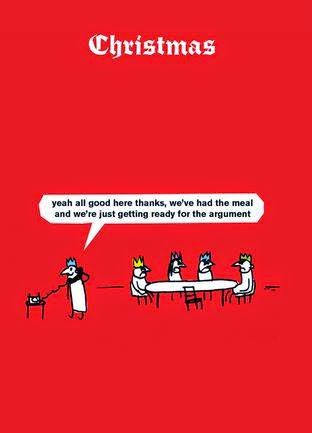 image from www.comedycard.co.uk/blogs/news with the hope that they don't mind too much.

And yet, for many reasons, you’ve found yourself back home for the holidays every year since. Even this year, although less than one month ago, you were on a white sand beach in the Coromandel, New Zealand, wearing shorts and flip flops, wondering how early in the day was too early for ice cream.

You had to come home. You had things to deal with. And when you booked the ticket, you had a strange feeling that there would be reasons you'd want to be around this Christmas.

At the beginning of November, you learned that your aunt, the woman who used to tape record made-up songs with you when you were a kid and give you the rings off her fingers, had cancer. At the end of November, you found out that your dearest friend’s dad – a man you’ve known three quarters of your life – had been in the hospital for a month with a failing heart. And then there were the issues you had face in your own life when you got home, issues you’re still not ready to write about on this blog.

Stop being so dramatic, you told yourself. What about the families of the children in Pakistan? Syria? What about Uganda, for godsakes? What would they have to say about you and your aging loved ones, struggling along with their first world diseases and emotional angst? And yet, as you re-enter the “real” world, you find yourself watching people – neighbours, families in strip mall parking lots, moms pushing strollers in supermarkets – and being certain that they’re having the Christmas you’ll never get, all love and laughter and cable-knit sweaters and fluffy snowfalls. When you reunite with friends, you try to be upbeat. You remind yourself how much worse it could be. And yet, despite everything, you can’t shake the feeling that this is not fair.

Two weeks after you returned, your aunt had surgery to get part of her colon removed, as well as all of her reproductive organs, in case the cancer has spread.

Now, as you walk into her hospital room, you have to physically force your mouth from dropping open. She looks as if she’s aged 20 years. Her normally animated face is drawn and gaunt, her once-sparkling eyes are shadowed. She is hunched over and frail, and so drugged up she can barely speak.

You hold her hand, now ringless, and try to think of things to talk about. You ask how she’s feeling, whether she’s sleeping, and if she has any appetite, even though the answers to all these questions would be obvious to anyone with more than two brain cells.

“At least you’ll be home soon!” you chirp.

One of the other women in the room doesn’t make it to the bathroom in time, and the stench is otherworldly. You and your aunt roll your eyes and attempt to laugh, and she winks and covers her nose with the top of her hospital gown.

She takes your hand again. Finally, you look her in the eyes.

“This really fucking sucks,” you say.
Silently, she nods.

Despite everything you’ve seen, you sometimes can’t shake the belief that bad things shouldn't happen.

People shouldn’t get sick. They shouldn’t get hurt. They shouldn’t leave each other, and they shouldn’t die – especially not at Christmas.  And if, god forbid, any of these events should occur, you still struggle to look on the bright side of life. Right? Talk about how it’s not that cold yet. About who won the game. About Michelle Williams’ hairdo. Even if, once in safely in the car or in the closet or under the covers, you crumble.

You once read that depression isn’t actually sadness. It’s the depression - the literal pushing down of - emotions we deem to be undesirable. It’s the belief that we shouldn’t experience fear, pain, anger, even hatred. That, simply put, we should not suffer.

Moments after you leave your aunt in the hospital, your friend’s father dies.

You soldier through the next couple of days, and, then, finally, find yourself reading young adult fiction and eating stale oatmeal cookies in your pyjamas until 4pm. You avoid or cancel most social interactions. Instead, you bake.

When people ask how you are, you start to respond with, “I’m glad to see you, but I’ve been better.” Amazingly, this doesn’t scare most of them off. You put aside the youtube videos and books you’ve amassed about positive thinking. Fuck positive thinking. You'll get back to it later. As Augustus Waters said, That’s the thing about pain. It demands to be felt.

And the weird thing is, the more you stop trying to be anything other than how you really are, the more moments of pure happiness pop up out of nowhere. They last a few minutes or a few hours, then dissolve like paper boats in a stream.

You visit your friend, a few days after the loss of her father. She tells you how sometimes she’ll be carrying on through her day, and then suddenly drop to the floor, crying so hard she can’t even find the strength to move onto a piece of furniture. As she tells you this, her eyes fill with tears. You reach over and take her in your arms, and she sobs. Your tears fall, too. You remember, again, that no matter how good the weather, how comfortable the couch you’re sitting on, and how much worse other people have it, you can’t take her pain away, just like nothing and no one can take yours. So you just hold her and say, again and again, “I’m here. I’m here.”