A Hitchhiker's Guide to New Zealand

Yeah, they probably have it in other parts of the world, too, but I guess since people come here specifically to drive from Point A to Point B (and with good reason – if you want to feel like you’re in a car commercial, come drive in NZ,) there’s a ton of rental cars floating around that need to get back to Point A. Which you can do for free, or almost free, with just the tiniest bit of planning ahead.

This is how I find myself, one rainy October morning, driving a brand new, sparkling white RAV 4 from Queenstown to Christchurch.

I've only just picked up the car, sorted out how to use the important bits (hook up my phone to the stereo so I can blast tunes) and am making my way out of the city, windshield wipers a-swishing, when I pass two people, a girl and a guy, standing on the side of the road. They’re holding a huge, hand-lettered sign that reads “CHRISTCHURCH”. And they are both utterly, completely soaked.

Out of instinct, I keep driving. I am Canadian, after all. It's actually part of our primary school curriculum that anyone with their thumb out on the side of a road is going to chop us up into little bits and hide us in a basement meat freezer.

It’s freezing out. They were shivering.  I’m in a free, brand new giant car with 4 empty seats. I turn around and drive back to the gas station where I’d seen them.

Still, I’m slightly relieved when they seem to have gone.

Then I look over spot two drenched figures, heaving backpacks, bicycles and bags under the gas station awning.

That's the thing about traveling. One minute, you're on a solo road trip to Christchurch, practising your steering wheel drumming and shouting along to The Battle of Evermore, and the next you’re sharing a 10 by 6 foot space with a 20-year old and a 23-year old, who are headed to the north island to a festival called (are you ready?) Cosmic Forest.

We don’t stop talking for the next 7 hours.

Lucy and Conrad are more mature, thoughtful and articulate than I probably was at 33, never mind at their age. But it’s more than that. Something about the meeting of their wonder and my cynicism ignites sparks. Their enthusiasm, their curiosity and their openness fill up the car, and we discuss the Beatles, travel, religion, marriage, and Lord of the Rings in great and detailed depth.  By the time I drop them off that evening, we’ve made plans to meet up again the next day, and make our way north together. Which we do, in an even bigger, shinier, possibly whiter SUV. 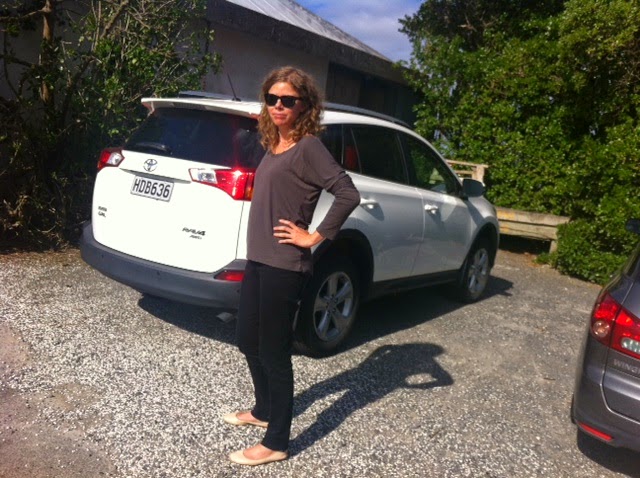 "If you don't settle down, I'll turn this car around RIGHT NOW!"

For the record, hitchhiking is commonly practiced in New Zealand. If it weren’t for a few bad travel experiences in my past, I probably would have done it myself. Of course there are always risks, but there is a kindness here that is part of the fabric, a trust that goes without saying. This is a place where people turn an old schoolhouse into library, open 24 hours a day, with books loaned and returned on the honour system. One day, I woke up to a full breakfast, cooked and left for me by people I’d met the night before, who had already taken off and whom I’ll likely never see again. A man I met on the beach stopped me to make sure I headed back to my car before sunset, as the paths here were confusing and I might get lost in the dark. It's what I imagine North America might have been like 1940s or 50s – friendly, innocent, warm. Unlocked doors. Strangers lending a hand. 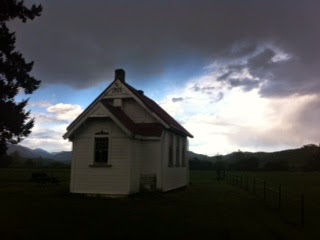 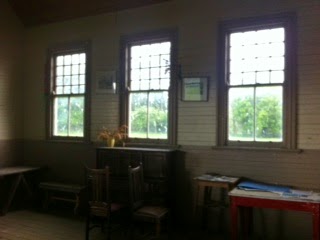 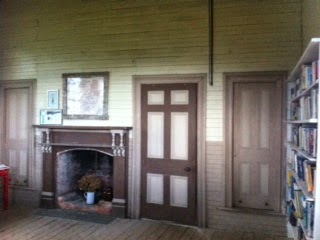 I drop Lucy and Conrad off as near to the ferry as I can, and check in on them later to make sure they made it. Over the next couple of weeks, we text and email every so often, and finally, we meet up again. They are camping on a piece of land that some farmer has set up for travelers to use for free, and I’m driving a sexy gold minivan from Wellington to Auckland. They cook me powdered mashed potatoes and frozen peas and we catch up late into the night. Conrad sleeps in the van, while Lucy and I share a tent the size of a piece of toast, me preserving warmth in a sleeping bag zipped up to my eyebrows. The next morning, Lucy's phone alarm wakes me up, and, disoriented and unable to unzip myself, I crash around like a giant caterpillar, swearing and knocking things over.

My top notch camping skills, combined with the cars I've been driving and our age difference, have us joking that I could be their mother. As weird as that is, it’s a role I find myself enjoying – worrying about them, answering their questions about meditation, giving them any advice I think would be useful for their journey. I hook them up with a place to stay in Auckland, and one day we meet up to go to an exhibit at an art gallery. It's a series of light installations, many of them interactive. Being with "the kids," I give myself permission to float around from room to room, lie on the floor, play. It is the kind of afternoon Ferris Bueller would dream about. 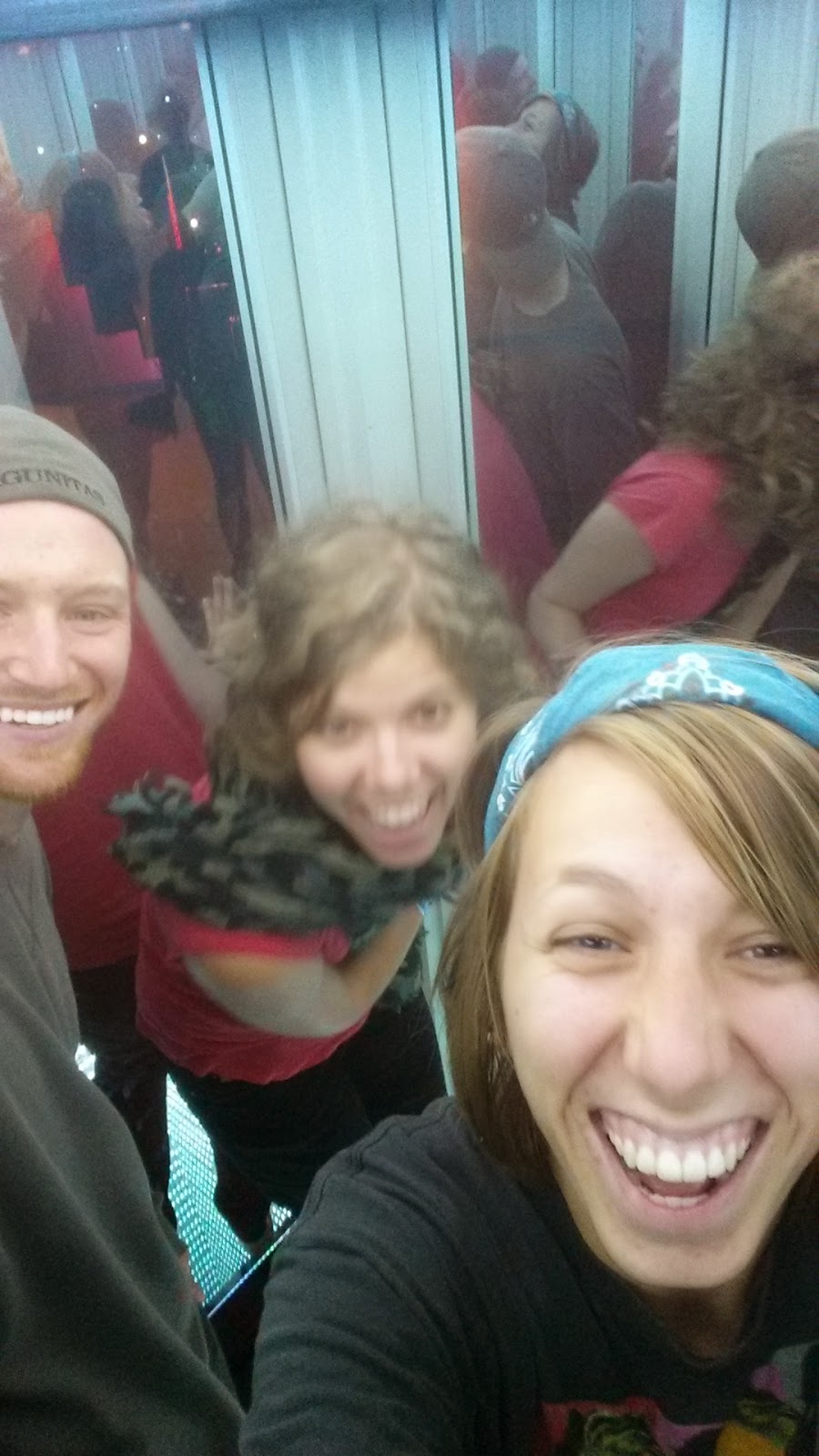 “We can't decide,” says Lucy."And we don't want to make the wrong choice."

I tell them – in my ancient, 37-year old wisdom – that it doesn’t matter. That there is no set course from A to B to C, and that whatever they do, they can’t regret the path not taken.

I so wish someone had told me this when I was their age.

We walk down to the port, and there, we part ways. There are hugs and smiles and love, and promises to meet up again. I walk a block or two in a cloud of gratitude, and suddenly, I hear someone shouting my name. I turn to see the two of them flying back up the street towards me.

“We’re not good at goodbyes,” Lucy gasps, as they stumble to a halt."We just wanted to say that you changed our course. We’ll never forget you.”

“We didn’t know you before you left,” Conrad adds. “But you should be proud of yourself for how far you’ve come.”

I’m not sharing this to honk my own horn. I’m sharing it because, for me, this is New Zealand. It’s not perfect. It’s not paradise. It’s really expensive, for starters, and has insanely unpredictable weather. But it’s a place where goodness seems to shine brighter. Where kindness begets kindness. Where even a diehard cynic might come to see that despite all the mistakes, wrong turns and regrets, there was always only one path – the one she’s on. And that the only way up is forward.

I won’t forget Lucy and Conrad, either. That they reminded me to be more open, to take things less seriously, and to start believing, a bit more, in things happening for a reason. We hug again, all three of us together. And then, with the familiarity and affection of people who have known each other for years, we say goodbye.