I spent the last week of my travel adventure this summer in Turkey, staying with my dad. The closest swimming area to his place isn’t reachable by foot, but there’s a boat taxi that can take you there. Actually, it's more of a boat bus, as it leaves on the half hour and goes back and forth across the bay, but the point is it takes you to the beach, and the beach was where I wanted to be, as much as possible.
The boat taxi moves extremely slowly, almost as if to lull you into a holiday mind state. The second day I took it, we were chugging along towards the beckoning stretch of sand, with its chaise lounges, umbrellas and vacationing people, when it occurred to me – I hope you’re sitting down here – that I was actually relaxed. 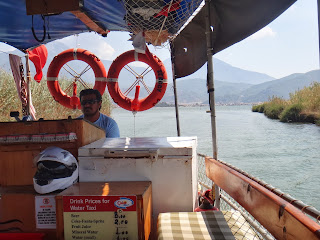 I have to admit, I got a little bit excited about this. Being relaxed something I feel I regularly strive towards, but very rarely achieve. Much more common is, “WHY THE HELL CAN'T I JUST RELAX?” which works really well, let me tell you. And yet, that morning, I didn't need to get to the beach any faster. The sun was glistening on the waves, the breeze was blowing, and I was grateful to be exactly where I was. Curious about this unusual occurrence, I searched my brain for what might be different. And behold: something was missing. Very missing. Something you could call The Plan.
I tried to remember the last time The Plan hadn't taken up most of my brain space. This took considerably more effort. As a "creative person," I have spent so long struggling towards achieving "the dream" - i.e. get book published, change millions of lives, be on Oprah, live happily ever after - that I've started to forget there is anything else. I realized that the last time I didn't have The Plan on my mind was 8 years ago, which was also the last time I travelled on my own, and that was only because The Plan didn't yet exist. Back then, I was still searching for what and who I wanted to be. Since then, with slight alterations here and there - replace book with film, Oprah with Ellen, add baby, stir, etc. - it's always been front and centre. There's always been some other life waiting for me, a life which would be mine after I jumped through enough hoops and climbed enough mountains. Who I am, where I am, and what I am doing has never been adequate.


New Year's Day, 2006, Zurich. Totally plan-free. Also, hungover as @#*&.
Not that the last 7 years have been hell, by any means. But there has been an undercurrent of dissatisfaction so constant, one that I assumed was simply a symptom of not having achieved enough.

Before getting to Turkey I’d been in Oxford with a dear friend, someone who embraces a life philosophy totally opposite to mine. You’ve never met a person so in the moment, who is more appreciative of the small things in life, or who has more fun. Interestingly, I hadn't seen him for 8 years, either, since the beginning of that last solo trip. As we sat by the river and celebrated our reunion, he told me a fable about a fisherman. I'd never heard it before, but I know now, after gushing on about to anyone who will listen, that it's a pretty popular tale. In case you’ve never heard it either, it goes something like this:
Thai fisherman is fishing on a dock somewhere beautiful and peaceful. American businessman on holiday shows up.
Businessman asks fisherman:  “How long does it take you to catch all those fish?”

American asks, “What do you do for the rest of your day?”

Fisherman replies, “I spend it with my family.”
Businessman tells the fisherman he should fish more. That he should catch as many fish as possible. Businessman explains that the fisherman should buy a bigger boat and catch even more fish. He says that if the fisherman does this, soon he'll have his own company, and then his own production plant, and he can move to the city and have multiple branches, and retire a rich man.
“Why would I want to do that?” the fisherman asks.

The businessman replies, “Then you can do what you love: fish and spend time with your family.”
When my friend told me the story I nodded, knowingly. I thought I was a wise person who understood such things. I knew I'd spent much of life looking so far ahead I missed what was in front of me, but I believed it was for a greater good. And anyway I wasn't a businessperson, I was an artist. I had to make sacrifices.
Now, on the boat taxi, the way that I'd been manifesting that fisherman story became clear to me. I saw how the constant chasing of the carrot on the stick; the drive to be better, faster, stronger more - to be, let’s be honest, a Somebody – had gotten me to one very definite destination: miserable. I'm not bashing dreams here, please understand. But there is a difference between knowing you'd like to go someplace, and determinedly beating yourself up every minute until you get there.

Then, something mysterious happened. It all floated away.

I simply stopped caring. Not about writing and creating, but about the outcome I was so feverishly running towards - the validation, the accolades, the future self I supposedly needed to become. It's one of the greatest gifts I've ever received.
When I returned home to Montreal, I started to really see how chasing the carrot had affected every part of my life. How being so focused on making sure I got my piece of the very limited pie was making me not just sad, but self-involved. I wasn’t really engaged with my community. I wasn’t doing much that was joyful. I'd put a TON of pressure on my relationship to compensate for the misery I was causing myself. I even realized how rarely I'd enjoyed creating, because I'd felt such pressure to do it better, faster, and more. A few weeks after I returned, as an experiment, I applied for a grant, but decided to only submit the application if I could enjoy the process of finishing it on time. I played music while I wrote. I took breaks and skyped with old friends. I brainstormed in pictures, with Crayola markers. In other words, I had fun. Fun! Making art! What a unique concept!
The more people I talk to about my boat taxi moment, the more I see that similar types of switches are going off for others. One friend, who just got her PhD, confessed that she got more fulfillment spending two weeks hiking alone in the mountains than she did seeing “Dr.” on her credit card, after 12 years of schooling. Another, who was diagnosed with MS, was left by her husband and learned that her father had brain and lung cancer, all within less than a year, now talks about the clarity she has from no longer being under the illusion that she's in control of her life. I’ve spoken to people in their sixties and seventies about the lengths they went through trying to fill or ignore the empty holes they were convinced no one else had, and the sadness and harm it brought them and the people they loved. They have such gratitude that their plans didn't work out the way they were supposed to.
The Buddha said that pain is certain, but suffering is optional. I'm feel more freaked out than ever there days, and also more at peace. I could try to tie this post up with a tidy summarizing statement, but this is about a question, not an answer. And I'm pretty sure that the more I keep asking it, the better.
Labels: travel, writing