You arrived on my doorstep yesterday. Well, not you as such, but the latest installment of your diary, which I’d pre-ordered from Amazon. I know they are harbingers of evil and I will be going straight to hell for this, but it'll be worth it. 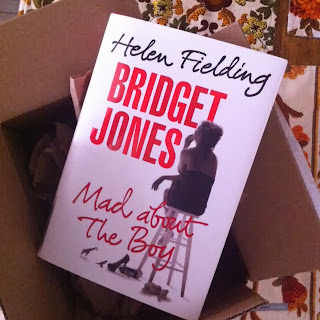 I can't remember the last time I was so excited to read a book. I realize, as a “writer,” this is not something I should be shouting from the rooftops. I’m supposed to be going gaga for whatever won the latest Man Booker, or at least something that sounds literary. And yet I ripped the box open and had started the first page before my ass hit the armchair. For just an hour, I told myself. Then for just one more chapter. Then, until I finished lunch. The next thing I knew, I’d gotten to the last page.
It was like spending the day with an old friend, one I hadn’t seen in years and had missed more than I'd realized. I first discovered you in my early twenties, when my roommate told me about your diary, and was shocked that I’d never heard of it. I was so broke at the time that I read it at the bookstore during breaks from my job. I did eventually buy it, and it is now the most battered, worn out book I own, due to having been stuffed in a backpack and dragged across several continents on my post-graduation “finding myself” trip, after another roommate told me that one should always travel with one's favourite book. I'm revealing a lot here - again, I feel like I should claim that I brought along Siddartha, or Zen and the Art of something or On the Road at the very least. But what it comes down to, and what I remembered, still in that armchair, straining my eyes because the light was fading but in too deep to turn on a lamp, was how much better you make me feel about myself. Not because I’m better than you (and yes, I realize you're not a real person, but let’s not go there) but because you make me feel like it’s okay to be human. What better travel companion is there than one who reminds you to laugh about the fact that despite visiting three continents, being given a Sanskrit name and learning to pee in a squat toilet, you did not actually manage to find self?
You make me feel like maybe it’s not so weird and shameful to obsess, or to fantasize about future 5 minutes after meeting someone. Or to feel lonely sometimes, even when I shouldn’t, or to feel like I’m both too much and not enough. I get so convinced that everyone else has it figured out, and god, do I ever appreciate I'm not the only one who pulls that stunt. I spend so much time chastising myself, telling myself no one else would go to visit a friend - a new friend, whom they're still hoping to somewhat impress - and get salsa all over their pants, and then go to pick up a takeout and realize they’ve forgotten their wallet at home and have to go back and ask said new friend to borrow money to buy dinner. Or invite people over for macaroni and cheese and suddenly, painfully realize, once the wine has been poured, that they forgot to get macaroni. Or be late for a meeting because they remembered the street address backwards. I realize these are not problems of a global scale, but what I don’t notice, when I’m having them, is how loudly I shout at myself. Yet there you are in your chocolate-smeared coat, or stuffing grated cheese straight from the fridge into your mouth, or obsessively checking Twitter, or feeling hideously sub-fashionable among the youth. And when you share all that, it feels like I’m not failing as badly at life as I thought. Also, you make me laugh. A lot.
Around the time your first diary started to make it big, TIME Magazine suggested that your diary, along with the existence of Sex and the City, signaled the end of feminism. That going on about men, shoes, weight and cheese, instead of careers and the joys of boot camp yoga and how great it is to be alone and depend on no one, meant we were all moving backwards, reversing at warp speed to the 1950s. But I saw it differently. I still do. Your writing is a salute to all of us - women, men and other - who are trying to Be Good, struggling to Do it Right, doing everything we can to Become a Success, and feeling like most of the time we just aren’t making the grade. Who berate ourselves for not being exemplary parents, patient enough partners, workaholic enough careerists, or feminist enough feminists. Who, to choose an example completely at random, get excited to be invited to the "networking event," then hide in the bathroom until our friends arrive because we suck so badly at small talk. But because of you, instead of going home that night feeling small and weird, and not even close to Strong, Smart and Sexy, whatever the hell that means, we feel like maybe we're okay, and that was even kind of funny, and what sort of world do we live in anyway where froth served in a plastic spoon is called food?
I'm going to go out on a limb and say that even though you're a character in a book, to many of us you are real, in the best possible way. From armchairs around the world, we raise our glasses to you in salute. And, as you so beautifully put it, we Keep Buggering On.
Labels: books, Bridget Jones, British comedy, self-esteem