For the past year, a bunch of other Montrealers and I blogged once a week as part of a group blog experiment called 365 Attempts (at life.)

The last post on the last day fell to me. Here's what I wrote, but with some extra pictures that I didn't include in the original post, because I love ya.
My fellow bloggers have spent the week writing beautiful posts about the experience we’ve shared during this experiment over the last year. Thus, in my final - and the final - 365 Attempts post, I’m going to let you in on a little secret. I didn’t realize it was a secret - I thought it was common knowledge. But after speaking to several friends, I learned the truth: very few of you know about the easy way to put a duvet cover on a duvet.
I hear more and more tales of people struggling upside down, grunting and swearing, emerging from the duvet cover without success but with a hairdo that could rival Russell Brand's and retreating to the kitchen for a large glass of wine while shouting at their partner to do it their goddamn selves. Not necessary! If you, too, struggle with this, the following instructions will help. personally, I love his hairdo and also Russell Brand is one of my heroes, so I mean no offence by that statement
1.  Turn the duvet cover inside out.
2.  Reach both hands inside the now inside-out duvet cover and take hold each of the far corners, that is to say the corners that belong to the top end of your duvet, with each hand. (At this point I also recommend you climb inside and make ghost noises, but this is not essential for the end result.) 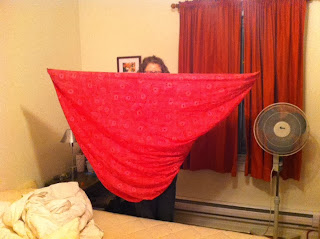 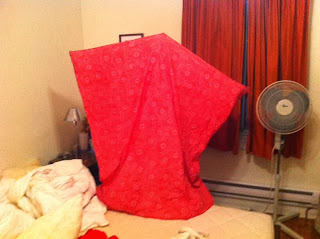 3. Now grab the corners of the top end of the duvet itself with these same two hands, from inside the inside-out duvet cover. 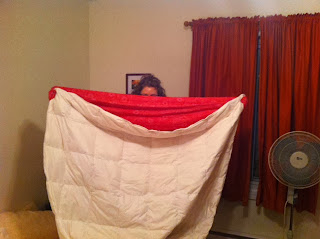 4. Perform a swift flourish in which you shake the duvet cover so it inverts itself to be the right way out and falls over most of the duvet. 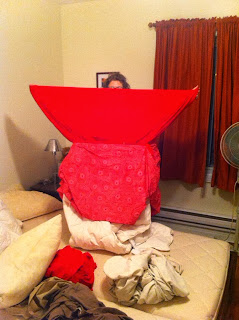 *
Now, about blogging once a week for the past year.
When I was in my early twenties - as opposed to the very late twenties I’m in now - I spent a summer cleaning houses.
I actually liked the job. There was something soothing about scrubbing a tap until it shined, or vacuuming a carpet until it was fluffy and spotless. But I think the other reason is that that was the summer my parents split up, and being in other people’s homes gave me a sense of hope.
I would walk through their living rooms and think about the family who lived here, all crowded around the TV together. I’d look upon their kitchen tables and master bedrooms and imagine them, parents and young children living under one roof, laughing and enjoying each other’s existence. The following year, back at university, I had the good fortune to live in (the rattiest building in) a beautiful old neighbourhood. Every night as I walked home, I would gaze into the big bay windows of the grand, Victorian houses I passed. The cosy living rooms and book-lined walls and big couches, the people sitting down to dinner, smiling as they put steaming platters of food on tables… I was certain these people were fulfilled and completely at peace, and that one day, I would be just like them.
I graduated and went traveling. I came back home and fell into the clutches of a full-fledged depression. I recovered and left to travel a second time, and broke up a perfect-on-paper relationship with a guy I was by all accounts supposed to marry. Some shitty things happened, and some great things, and I finally came back to follow my dreams and become one of those people. But no matter how hard I tried, it just wouldn’t happen.
My life didn’t feel fulfilled or at peace. Sure, I had moments, but the goal isn’t moments, is it? It’s 100% A-okay. It’s true love and a wedding with lots of mason jars and a design-blog-worthy home interior and perfect children and a mantelpiece full of accolades from your Top 40 Under 40 career.
The fact that I wasn’t measuring up to this never hurt me more than the summer I got married. Tony and I were arguing night and day, and I was goggle-eyed with anxiety because this was supposed to be the happiest time of my life and instead I was terrified and angry and lost and not actually sure if I would make it down the aisle. I barely shared this with anyone, though, because I was sure I wasn’t “supposed” to have these types of feelings. Certainly not before getting married, but really, not ever. And yet, I shared it on my blog. I guess it had to come out one way or another. I didn't relate the whole shebang, event for event, but just wrote a little bit about how scared I was, and how much pressure I felt to be bridey and happy. And some people said, “Yeah, I felt that way, too.” And each time they did, I felt a little bit less crazy.
I began to share more after that. Every time, I pushed the envelope just a bit. I’d write a post, click “publish,” and then lie down on the floor and think, “I can’t believe I just admitted that. I’ve ruined my life.” And yet, those posts were the ones that got the most responses. The more I shared, the more people shared back, opening up about their own frustrations and family dramas and personal tragedies, or just saying, “Thanks. I needed that today.” And likewise, whenever I read someone else’s truth, I felt more at peace with my own. The more truth that floated around, the more I recognized that the perfect life I was pushing myself towards didn’t actually exist, and that all of this pushing was making me kind of crazy. And I wasn’t the only one.
That’s why I wanted to do this project. This world we live in is far too lonely and alienating as it is. I really believe that the more truth we share, the easier it is on all of us.

So here are my parting words to you, dear 365 reader, aside from – shameless plug – I will still be writing at nataliekarneef.com so please come visit me there anytime:
As much as you can, please, tell the truth.
Even if you’re not a blogger, or a writer, or even a talker. Even if the idea of it scares the motherloving pants off you, just try it once, as an experiment. Open up to a friend you don’t know well, but would like to. Share something with a colleague, or a neighbour, or an old friend you haven’t heard from in years, or a good friend you haven’t spoken in months, out of pride or hurt or anger. Reach out and say something from inside your heart. Sing the truth, or dance it, or put it on a cake. That’s what we were put on this earth to do, not to play it cool or pretend we’ve got it all together or keep it all in so as not to trouble anyone. Keeping it all in will kill you. That may be a strong statement, but I believe it with all of my heart.
Tell someone what you’re afraid of, what keeps you up at night, how you really feel about your mother. And then do it again. Hell, tell me! I’d love to know. No one has a squeaky clean life. No one. Okay, maybe a few people, but we won’t talk about them. The rest of us have messy, certifiably insane families, and are laden under the weight of addiction and jealousy, and are rife with indecision and co-dependencies and secrets we’re certain we’d be burned at the stake if people found out. But we wouldn’t. And if someone you tell is still so afraid that they judge you for telling the truth, there are 199 others who will hug you and pour you a cup of tea. I promise.
Stop airbrushing your life. That Instagrammed breakfast looks great, but it’s probably not an accurate representation of your morning. You are far more delicious and unique than the outfit you’re wearing today or the lunches you make your children or what you pin on Pinterest. We care way more about  how you got your stretch marks and scars and cracks, and how you survived them. Because we have them, too. We’re all on this boat together.
Thank you, from the bottom of my heart, for reading us this year. It was an honour to tell you the truth every Saturday, and to read Tanya’s and Kenneth’s and Carlo’s and Courtney’s and Antz’s and Johnny’s and Nat’s truths throughout the rest of the week. You guys are seriously awesome.
With love,
Natalie
Labels: 365 Attempts [at life], blogging, duvet covers, marriage, Tony, writing