Saturday: a Big Fat Greek Wedding.
Amazingly, it is my first as part of the family.  (Tony's and my wedding, with an outdoor ceremony conducted by a Unitarian minister at a maple sugar shack, definitely didn’t qualify as Greek.)  But there have been lots of other events - engagement parties and funerals, the dipping of babies in olive oil - and they all have one thing in common, aside from the abundance of food: half an hour before we leave the house, my husband goes bonkers.
I don’t know why.  I don’t know if it’s because he has to wear a suit and tie, or if it’s something he inherited from Papa Greek, who always showed up 1 hour and 45 minutes early for everything.  And it doesn’t matter how organized we are, or how early we start getting ready.  Case in point: today, the ceremony starts at 3.  Since we have to pick up Mama Greek along the way, we decide to leave at 2.  Tony then reminds me of this several times over the course of the morning.  In a desperate attempt to avoid the traditional stress explosion, I start getting ready at noon.
At 1pm, Tony is going over a script.
At 1:50, he appears at the top of the stairs with bits of toilet paper stuck to the shaving cuts on his face, wearing only his underwear.
“Fuck,” he is saying.  “Fuck, fuck, fuck.”
Backing away, I say, “I’ll just go start the car, and cool it down,” and run out the door.
He yells after me:  “Can you call my mother and tell her we’re running late?”
I dial Mama Greek from the safety of the air conditioned car.
“We’re just leaving!” I say, when she answers the phone.
“Who is this?” she asks.
Tony is an only child.  Papa Greek passed away a year ago, and Mama Greek leaves her house three times a week, at most.  Her friends are all over the age of 80, only speak Greek and don't drive.  And she hasn’t forgotten about the wedding, because we discussed it at length two nights ago, when we were over for dinner.
“It’s Natalie,” I say, through clenched teeth.
“Oh,” she says. There’s a pause.  “What I’m doing?”
Also, she refuses to admit that her hearing is starting to go.
I take a deep breath.  “WE ARE JUST LEAVING,” I repeat.
“Oh!” she laughs.  “But it’s too early!” 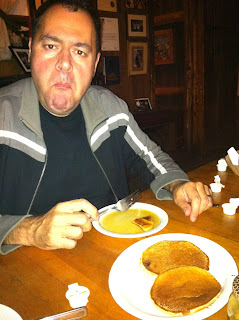 Tony, eating pancakes at our wedding venue. We make a pilgrimage to the sight at least once a year.
I wait in the peace and quiet of the car a few more minutes, before realizing that the address of the reception is on the invitation, and the invitation is still inside the house.  In an attempt to stay in my oasis, I call out to Tony from the driveway.
“Can you grab the invitation?”
“COMING!” he yells.
“NO,” I shout, for the benefit of our entire block.  “THE INVITATION!”
“WHAT???”  he shrieks, and this I when I snap.
The oasis is gone.  I storm back up the stairs, getting one of my high heels caught between two of the slats.  Why does he have to do this?  What is the point in getting so stressed?  “It’s a WEDDING!” I want to scream.  “It’s supposed to be FUN!”
Inside the house, I find Tony in my office, red-faced and sweating, trying to climb into his shirt, which has the cufflinks already in the sleeves.
“Can you help me?” he asks, pleadingly.
Pointedly, I hold out my hands to show him they have just been manicured – an event so rare it could have its own Hallmark card.
“I’ve put them on backwards three times,” he says.
Letting out a labored sigh, I do the cufflinks.
We drive to Mama Greek’s in silence for a while, until I look over at my husband. His cufflinks are still firmly in place, but his shirt is unbuttoned to the navel, exposing his stomach for all of Ville St. Laurent to see, his chest hair ruffling in the breeze.
“What,” I say, very slowly, “are you doing?”
“I ran out of deodorant,” he says.  “I need to stay dry. I'll just borrow some of yours when we get to my mom's.”
I point to my handbag, which is slightly larger than a piece of toast, and could no sooner hold a stick of deodorant than it could a Great Dane.  Tony’s eyes bulge out of his head.  “You didn’t bring any?”
I turn back to the road, saying nothing.
“What happened to you loving me?” Tony asks.  “Why are you so fickle?”
“I do love you,” I tell him. “You’re just really annoying.”

“That’s more like it,” he says.  “How’s my hair?”
*
This will come as no surprise to you, but by the time I’ve set foot in Mama Greek’s house –30 seconds behind Tony – a yelling match has broken out.  Even with my very limited Greek, right away, I know what’s going on: Mama Greek is freaking out because Tony isn’t wearing a tie.  From the sounds of things, he may as well have showed up butt naked, or, for that matter, with his shirt unbuttoned to the navel.
“You can wear one of your father’s!” she shouts.
“I’m not wearing a tie, Ma!” Tony shouts back, disappearing down the stairs, presumably to find deodorant.
“Paul will be wearing a tie!”
“PAUL IS THE GROOM!”
Despite all this, we arrive at 2:53.  350 people are expected at this wedding.
The church is still completely empty. 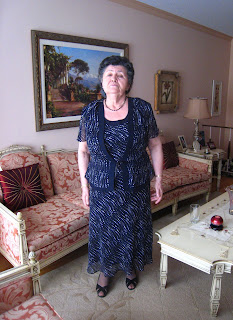 Mama Greek asked Tony to take a photo of her in her
BFGW finery. "You never know when you gonna need nice picture of me," she said.

After the ceremony, during the picture-taking on the church steps, I see the groom’s uncle, who grew up with Tony.
“I asked your mother-in-law how she’s doing,” he tells me.  “She says she’s not going to be happy until you guys have a baby.”
“SAY CHEESE!” the photographer yells.
I gaze at the row of girls standing in front of me, their manicures unscathed, their salon ringlets piled perfectly on the sides of their heads, still frizz-free in the heat.  I know what’s coming next.  We will return to Mama Greek’s to feed the dog.  She will sit down across from me at the kitchen table, and deliver her favourite talk: on the sanctity of marriage.  Then she will say that Papa Greek and her rarely fought, when in reality I know they spent most of their 42 years at war.  And she will cry a bit, which she is perfectly entitled to do, but which I know, without the uncle having to tell me, that she wouldn’t be doing if there were a mini Asimakopoulos on the way.
The photographer calls out to the guests to crowd more tightly into the picture.  I am tempted to hide behind one of the ladies in front of me and bemoan my fate, but suddenly, I remember something else about Big Fat Greek Weddings: the most beautiful, memorable part.  The part we will talk about for ages.  The part which is still to come.
The open bar.
And I smile. 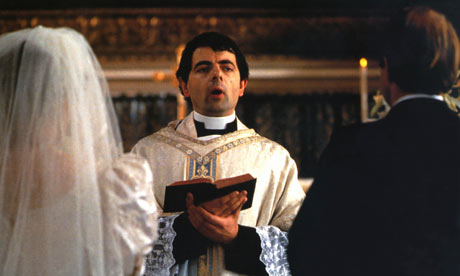 best response to a Big Lebowski debate ever

If I weren't already married, I would propose to the guy who answered at the bottom. 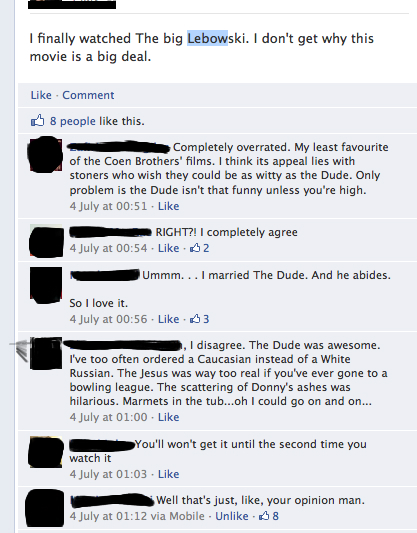 No comments:
Labels: The Big Lebowski, The Dude abides
Newer Posts Older Posts Home
Subscribe to: Posts (Atom)
*With thanks to Where the Hell is Matt, who inspired me and so many others by dancing badly around the world several times. And okayed me riffing on his URL. If you haven't already, check him out.
Who the hell is Nat? More about me over here.