Published in the Huffington Post (sans images) as "My Love Letter to Montreal, 10 Years in the Making" on June 13, 2012.

10 years ago last Sunday, I sat by a window at restaurant called "Tutti Frutti" on de Maisonneuve, ordered a plate of pancakes, got out my journal, and wrote:
"What the HELL have I just done?"
I'd been in love with Montreal for years.  From the night I'd arrived for a weekend visit during first-year university (do I have to say it? YES, from Toronto,) and bought WINE with my McGill friends at 10:58PM, FROM A CORNER STORE.  From my first trip to the mountain, when I found myself at a poodle's birthday party.  After my first hangover recovery over a highrise sandwich and a milkshake at Santropol, I'd made up my mind: Montreal was where I was going to find myself.  It was chic.  It was Europe without the visa issues.  It was where I belonged. 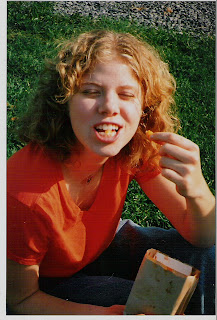 circa 1996. As you can see, some chic was definitely in order.
Cut to 2002.  I was living in my hometown of Ottawa, working at a job  as mentally stimulating as bellybutton lint, in a relationship with someone I had not yet admitted to myself I shouldn't be with.  I was, I now know, clinically depressed.  It was the only time I ever got out the Yellow Pages and searched for a mental health hotline.  But there was a light on the horizon: I'd applied to the 1-year journalism program in Montreal. My favourite city was going to save me, and journalism was going to give my life meaning.  I'd be a writer, living in an Amelie Poulain-style apartment in the Plateau, but still be a respectable citizen, and also maybe change the world or something.
The journalism program rejected my application. 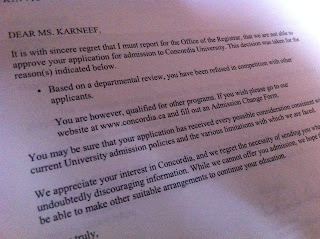 yeah, I kept the letter. For the day I would blog about my story and they would regret EVERYTHING
Lying in bed some nights later, during a brief moment of calm between bouts of hopeless misery, something occurred to me.  There was nothing keeping me in Ottawa, except my relationship, but wasn't there that thing about absence making the heart grow fonder?  I could move to Montreal anyway.  I could live in my Amelie flat, get a job,  be colourful and interesting and poetic, and also buy 79-cent pizza at 4AM.  And so, on June 3rd, 2002, with a rental car full of clothes, my metabolically-challenged cat, and $1000 (enough money to live for, like, ever,) I moved into a tiny sublet bedroom in a 5-student apartment on Maisonneuve and Guy. 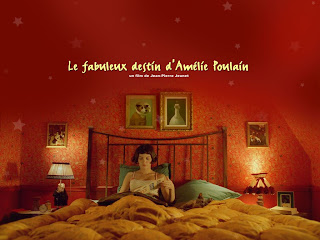 I would be just like this, only with frizzier hair.
The next morning, after my moment of terror over my plate of pancakes, I put my journal away, its question still dangling over my head, and walked up St. Denis to Mount Royal boulevard.  It was a sunny, perfect, early summer's day, and people were out on their rollerblades and their bikes and their terraces, beaming at each other as they do here, as if we're all in on a giant secret that the rest of the country doesn't even suspect.  A Dutch tourist actually stopped me on the sidewalk and asked me out for coffee.  (This has never happened again since.)  I bought an Amelie poster, went home, taped it to my wall, and slowly, the light came back in.

what every single day is like in Montreal (except for 11.5 months a year)
Over the next few months, I moved into a shoebox-sized studio on St. Joseph.  I took a writing workshop, where I was introduced to Anne Lamott, whose books would go on to guide not just my approach to putting words on paper, but my understanding of spirituality, community, parenthood and when to just shut it all down and take a nap.  I got my first piece published in The Gazette, glory of glories!  I got a temp job answering phones at Global TV, which somehow got me a temp job answering phones at a small television company, which somehow got me my first real, properly-paying job in TV... at the same office where, 3 years later, I would meet my future husband.
I'm making this all sound like some kind of rom-com montage sequence starring Reese Witherspoon.  Those first few years in Montreal still mostly sucked.  Did I mention I was temping?  95% of the population assume that temps are on par, intelligence-wise, with lobotomized Barbie dolls, and treat them accordingly.  I lived on my own, so it was hard to find places to make friends, except at work (see previous sentence.)  And I stayed in my relationship, blaming myself for my unhappiness, instead of accepting that maybe I'd just chosen the wrong person.
Even when I started getting regular TV and writing work, I wasn't bounding out of bed in the morning.  Every minute of every day, I told myself that I wasn't doing enough.  I should be writing haute couture commentary for Vogue!  I should be in the Middle East, reporting for the CBC!  I should be the glam, the bam, the foosh, the whoosh, the new noir.  I should be at schmancy receptions, canoodling with Important People.  I should be Somebody.  And nothing was going to stop me until I achieved that goal.  Not even all the misery I inflicted on myself to get there.

Including bangs.
10 years later, I share an office space with my dog, a pile of dirty jeans, and some dust bunnies who have created a bungalow beneath my printer.
My shoe collection does not require its own room, or even its own closet.  I have been to some fancy events, where I spent a fair amount of time hiding in the bathroom.  (There are only so many hours you can spend listening to someone with glow-in-the-dark teeth tell you about the play he wrote and directed in senior year and the advertising firm in Brooklyn he "fucking rocked out.") I spend my disposable income going on road trips with the guy I live with: a 225-pound former junkie who wears undershirts to bed, and sings Fine Young Cannibals in a chicken voice when I bug him about not eating enough salad.
I'm happier than I've ever been.
It's not because I'm in Montreal.  Okay, maybe a little bit.  I still get giddy about eating at an outdoor table, being able to touch an amazing Indian restaurant with one hand and a Greek one with the other, and, yes, buying wine from the corner store.
But mostly, it's because somewhere along the way, I stopped making it about Montreal.  Or about wherever I was, or was supposed to be. (I moved to London in 2005 because I felt like I belonged there, too, and found even that wasn't far enough away to escape myself.)
If I could go back in time 10 years, and grab the girl in the pancake restaurant by the shoulders, I would tell her that she was never going to be Somebody.  Not that she wasn't going to go places, some of them just as she'd imagined, and some of them a whole lot better than that.  But that being Natalie is enough.  That exactly where she was sitting, pancakes, panic, frizzy hair and all, was where she was supposed to be.  Then I'd tell her to finish her breakfast, go out and enjoy the sunshine, and the fact that she was only paying $200 a month for rent.
Because despite how far she thought she had to go, she was already home. 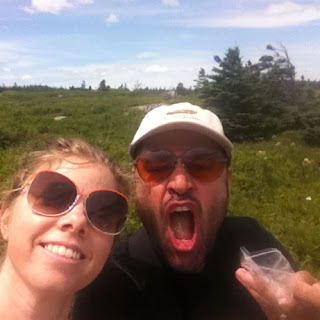 12 comments:
Labels: Montreal, rejection, the journey, Tony, Tony Asimakopoulos
Newer Posts Older Posts Home
Subscribe to: Posts (Atom)
*With thanks to Where the Hell is Matt, who inspired me and so many others by dancing badly around the world several times. And okayed me riffing on his URL. If you haven't already, check him out.
Who the hell is Nat? More about me over here.