Last Sunday was the one year memorial of Papa Greek's death.  The Greeks do a lot of memorializing.  There is a 40-day memorial, and, should you so choose, a 3-month memorial, a 6-month memorial, and a 3-year memorial.  If a Greek woman's husband dies and she doesn't wear black for at least a year, people talk - at least, that's  according to Mama Greek.  Who, by the way, is glad to be getting back into her pinks and purples.
"My husband gone," she'll say, plucking her black cardigan as if it were made of sandpaper. "Why I need to look bad too?"
*
At the memorial, I sit at the front of the church with the rest of the family, listening to the priest drone on in ancient Greek.  Standing up and sitting down with everyone else, I wish, as usual, that I were anywhere but here, had eaten a proper breakfast, and were wearing more comfortable shoes.  I have long ago accepted the fact that having incense thrust in my face and listening to a dead language is not how I celebrate Papa Greek's life.  I miss him in my own way, usually at Canadian Tire, or lying on the couch in Mama Greek's basement, and thinking the last time we were all down there together, watching the Stanley Cup Finals.
*
Back in church, Tony's cousin's daughters, 6-year old Sasha and 4-year old Alexa, make their way to our pew and stand next to me.  I look down at their pigtailed hair, and out of nowhere, I start to cry.  Silent tears gush into torrential, snotty, ugly-cry, to the point that Mama Greek completely stops paying attention to the service and starts throwing Kleenex at me.  Tony fends her off, and his aunt Olga, who is a force of nature and could take down parliament if she put her mind to it, takes my hand and starts weeping too.
The worst part is, I'm not actually crying for Papa Greek.  I'm crying because of the two little girls beside me, and how badly, much to my dismay, I wish one of them were mine.
*
The memorial is followed by a ritual of coffee, cognac, and cheese.
Don't ask.
I head to the bathroom, to get in a few minutes of hiding before it's time to shake hands with Greek strangers, who give me their condolences, even though I knew my father-in-law for 5 years and they knew him for half a century.  But no sooner am I through the door when an old lady grabs me by the arm and starts speaking very quickly in Greek.  Once I get across that I don't understand what she's saying, she pauses, looks me straight in the eyes, and says,
"You are decent girl.  Not too many like you no more."
Then she disappears, leaving me staring in the mirror at my mascara-stained face - the face of an impostor; the kind of girl who cries at a memorial for all the wrong reasons.
*
At the cemetery, as is the tradition, Mama Greek puts fresh flowers in the vase affixed to Papa Greek's tombstone, and chucks the old withered ones on the neighboring grave - something that never fails to bring a smile to my face. As sweeps and dusts the tombstone, Sasha and Alexa show up, standing at a respectful distance while their dad explains that Papou Menio is gone, and this is how we remember him.  Mama Greek and Tony start to argue about whether or not to replace the candle, and Sasha shimmies over to me.
"Do you know how to make a wish?" she asks.
"No," I say, surprised.
"You don't?" Sasha gasps, in disbelief.  "What kind of person are you?"
We climb back into the cars to head to the traditional post-memorial souvlaki restaurant, and I discover that I am deeply disturbed, both by the fact that I don't know how to make a wish, and that I have suddenly convinced myself that a 6-year old holds the secret to the universe.  I decide I must find a way to get it out of her, and that this way will be French fries. 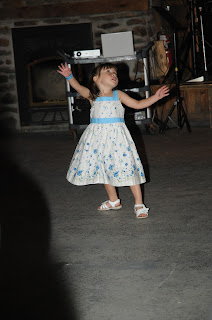 Sasha, age 3, dancing at our wedding
Later, with the promise of potatoes boiled in oil, I lure Sasha round to my side of the table.
"Sasha," I whisper into her ear, deathly afraid that Olga is going to overhear and check me into the Douglas.  "Will you tell me how to make a wish?"
Sasha looks at me oddly, and shrugs.
"You just think about something you really want," she says, "and then it comes true."
Then she dances off, singing Michael Jackson at the top of her lungs.  And I realize that maybe,  between this 6-year old pigtailed girl, the old lady in the bathroom, and the ghost of my father-in-law, there is something to be said for crying in church.  Or, at the very least, for spending a Sunday morning thinking about something you really want, surrounded by tzatziki, and people who love you, despite yourself. 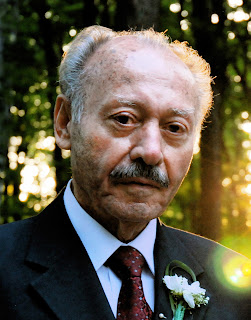