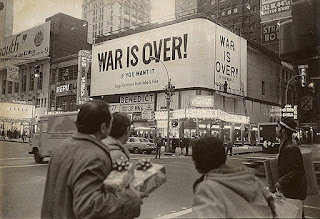 Sunday night, as usual, we head to Mama Greek’s for dinner. What’s not usual is that Tony’s cousin, Dimitri, is visiting from Greece. He is invited, along with two of the other, local cousins.
It’s the first time they’ve been at the house since Papa Greek died.
In fact, it’s the first time Mama Greek has really entertained since then. We arrive early so we can “help,” but she doesn’t let us do anything. Instead, she opens and closes the oven door, piles plates, frets over the potatoes being too cold and the spanakopita being too crunchy.
“WOULD YOU SIT DOWN AND RELAX, MA?” Tony yells.
Mama Greek spots me making salad dressing and leaps over.
“You need oil, Natalie?”
At this point, Tony and his mother really get into it. As usual, they are yelling in Greek, so I retreat to the living room, play fetch with Ruble, and resist the urge to hide under the couch.
“Why you not say nothing, Natalie?” Mama Greek calls out, once things have somewhat calmed down.
“Because I don’t understand what you’re arguing about,” I call back.
“I wanted to open the back door,” Tony informs me, storming out with a spray bottle. “She says the glass is dirty and people will notice, and I’m trying to clean it.”
That’s right. The Greeks are fighting about Windex. 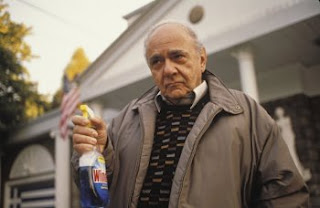 Despite its shaky start, the evening is a success. The cousins pile in, armed with wine and kisses and stories. Have I mentioned how much I love my cousins-in-law?
“Drop the in-law part,” they always say, and they have made me feel like family from day one - feeding me in Montreal, putting me up in Greece, supporting me when I needed it, installing shelving in my house. I am thrilled to be related to them.

I’ve brought a DVD over – a documentary about a local Greek restauranteur, who returns to Greece for his first vacation in 32 years. I’ve been wanting to watch it with Mama Greek, and I know the cousins will love it. The only problem is, we’ll have to watch it in the basement. Where Mama Greek refuses to go anymore, unless it’s to get something – or to clean - because that's where she and Papa Greek used to sit together at the end of the day, watching TV.
“Those were the best times,” she tells me. 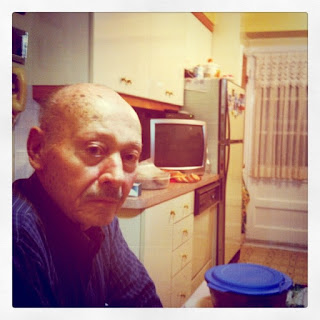 Hesitantly, I show her the DVD. To our surprise, she nods immediately.
“We watch downstairs,” she declares.
“Are you sure, Ma?” Tony asks. “We don’t have to.”
“I’m sure.” She points at the photo of the restauranteur on the cover. “Is he better cook that me?” 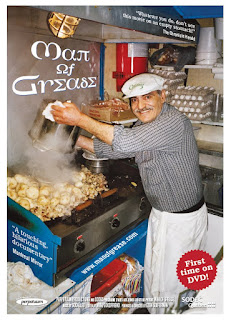 She sits between Tony and I on the couch. But as soon as the movie starts, she lights up. As it turns out, she knows both the restauranteur and his wife, whom, she tells us, has since passed away. As she watches, she laughs, clutching Ruble, and gives her usual running commentary.

“Oh ho ho!” she says, impressed at images of the food.

“She was good person,” she says, when the man talks about his wife.

“Beautiful,” she says, at the shots of Greece. It’s been a long time since I’ve seen her so happy. 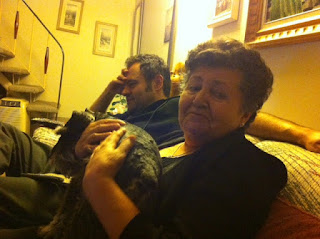 Later, back at our place, I walk into the bedroom to find Tony in what I call his “Britney” outfit. To give you a visual, my 225-pound husband has a selection of undershirts that aren’t long enough – much like Britney in her schoolgirl days. He wears them to bed, revealing a good two inches of gut and a lot of hair. Some nights, this infuriates me.  Tonight, he’s also wearing black socks pulled up to his calves.  He looks about 80 years old.
I am infuriated.
You know that feeling? The “I-can’t-believe-I’m-supposed-to-have-sex-with-you-and-only-you-for-the-rest-of-my-life” feeling?  What happened to making an effort? I want to yell. Remember when you USED to care about what I thought of you?  But something tells me to stay quiet, and for once, I listen. I sit down on the bed next to him.
“You look sad,” my husband says.
I shrug. “I sorta wanted to… you know.”
“I know,” Tony says. “I’m sorry. I’m really tired, and not feeling well, and…” Tears well up in his eyes. “And I really miss my dad.”
Sometimes, it’s so easy to forget what’s going on for another person – even if it’s the person you’re closest to in the world. Sometimes, it’s much easier to just take things personally.  Needless to say, my tears come, too. And in that moment, I go from anger to love - Britney undershirt and all.