Everything I've Ever Done that Worked

Tony is away, and although I didn't specifically agree that I would have dinner with Mama Greek while he was gone, she didn't really give me a choice in the matter.
"You coming for dinner tonight or tomorrow night?" she asked over the phone, a few days ago.  And that was that.
*

There are about 100 things I'd rather be doing, but I drive over, mopily, Ruble in tow.  Her favourite "movie" has begun when I arrive, which is actually a Greek soap opera.  I'm pleasantly surprised when she keeps it on, and as we eat, she explains the plot.  A woman, it would seem, is in love with a man, who's married, so she decided to marry another man, because he "has good job make good money." Then, when the woman and Good-Job-Good-Money man were at the altar, Married Man swooped in and ruined everything.


"She left her husband to church!" MG rages.  "You can't do that!  Young people, they think that love?  When you married, you don't go round round." (Round round is Mama Greel Speak for having a roving eye.)  "You married now, Natalie," she points out. "You not go round.  Tony not go round round." 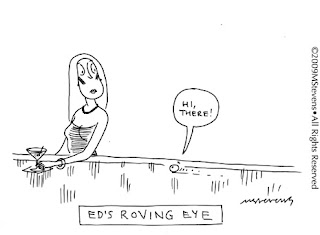 Later, the woman drops in on the married man and yells at him for not leaving his wife.


"But his wife pregnant," Mama Greek explains.  "I hope he stay with her."


We pause as the couple embrace passionately.


"Love too much," Mama Greek adds, which means "they love each other so much."  She looks at Ruble, who's sitting at her feet, as always, waiting for his onslaught of treats.

Lesley Garner wrote "Everything I've Ever Done that Worked" as a sort of "recipe box": life lessons she's picked up along the way, so she could come back to them when the going got rough.  Which is exactly why I write.  Except I usually forget the "coming back" part.
Driving home tonight, I realized that for me, one of those things is Mama Greek.  No matter how much I resist her, and how much she gets to me, I always feel good after spending time with her.  I've made her happy, and she's made me laugh.  I wish I could have an automatic pop-up reminder of this - in my face - the next time I mope about having to go over.


Then again, since I don't have any choice in the matter, I guess it's just a lesson I'm going to keep on learning.