Where's Nia Vardalos when you need her?

Mama Greek's side of the family - that's Uncle Greek, Auntie Greek, their two sons, their two daughters-in-law and their four grandchildren, plus various distant relatives and family friends - gather at a restaurant to celebrate Auntie Greek and Uncle Greek's 40th wedding anniversary.

I wear my cape - a 1970s thing I inherited from my mother, which Tony tells me, as we're getting ready to go, makes me look like the mother in Carrie. 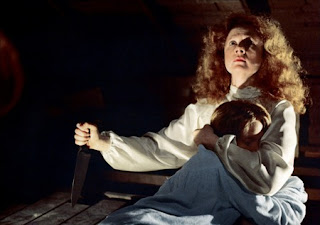 Dinner starts at 5:30, so, naturally, we pick up Mama Greek at 5:45.  She takes one look at the flower arrangement in the back seat of the car, which she ordered herself from the Greek florists, and starts yelling at Tony that the vase is wrong. Tony yells back, and they have a good match of it all the way to the restaurant, while I check Twitter and thank my lucky stars I never made use of that "Learn to Speak Greek" CD gathering dust on my bookshelf.
We  arrive and I hand the anniversary card to Auntie Greek, who immediately starts yelling at me (in English, unfortunately,) because there's a wad of cash in the envelope.
"I didn't put it there!" I insist, but she refuses to listen.  I try to pin the blame on Mama Greek, but she's busy lecturing another couple a the table who got married in December, giving them all the soundbites of advice she gives Tony and I on a monthly basis.
"Respect each other," she intones, wagging a finger at them.

A woman I've met once starts asking Tony when we're going to have babies.  I go hide in the bathroom. 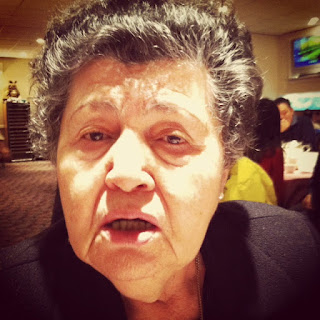 When I come out, Auntie Greek is yelling at Mama Greek about the money in the card.

"It doesn't matter," Mama Greek says, waving her off.  "I'm gonna to be dead in 10 years."
Tony turns to me.  "Is that a look of relief on your face?"
Thankfully, at this point, the champagne arrives.
Tony's cousin George, Auntie and Uncle Greek's eldest son, raises his glass and begins a toast to his parents' marriage.  Mama Greek starts talking over him, which doesn't matter because no one else at the table is listening anyway.

"Congratulations to my brother," she's saying.  "He is good man."
"Don't you think our waiter looks like Geoffrey Rush?"  Tony asks.  "Give me your iPhone.  I'm going to show him some photos from Shine."

"Why you not eat?"  Mama Greek asks me, suddenly, despite the fact that the only things on the table are either bread, or breaded, and I don't eat gluten.
I turn to two of the grandchildren, 6-year old Sasha and 3-year old Alexa, who are running past me.  I try to lasso them with my arms, and they squeal with delight, which makes my ovaries hurt.
"Oh, by the way," Tony says, pausing in mid-sentence with the waiter.  "They have lice."

A shitake mushroom appetizer is served, and all the Greeks start raving about it, saying it tastes "just like meat," despite the fact that 8 plates of actual meat are already on the table.  I spot an empty chair near Sasha and Alexa, and scoot over as Mama Greek tries to to pile deep-fried zucchini on my plate.  Sasha and I start having staring contests, in which she tries to make me laugh by making weird faces, squashing my cheeks together and talking to me the way old Greek ladies talk to babies.  I lose every time.

"A hundred and forty five?"

Alexa bounces up and down behind her with each guess. We have more staring contests, and suddenly, it's time to go.
As we get ready to leave, I put on my cape.  The girls go silent and stare at it for a moment, as if thinking, "Wait.  We thought we knew you, but..."
"Why are you wearing that?"  Sasha demands.
"Because I'm a superhero."
"Can you fly?"

"Go outside!"
"I don't fly before midnight," I tell them.  "It's a rule I have.  Watch for me out your bedroom window later - you'll probably see me."
Alexa gasps.
"She can NOT fly," Sasha jumps in, although she doesn't sound as convinced.
"Of course I can," I say, turn, and walk out the door, my cape whooshing behind me.

And after spending an hour with them, I almost feel like it's true.

Either that, or I have lice.
Labels: Greeks, lice, Mama Greek, superpowers, Tony