I've had a tenuous relationship with my brother.  I'll write about it another time, but just to say that for my birthday last year, when he gave me a huge chalkboard in a vintage red frame - exactly what I'd wanted for my office - and said something really sweet about starting over, I cried.
I cry pretty easily, but still.
I hung the chalkboard on my wall, with the intention of writing inspiring and uplifting quotes on it, so that I could be inspired and uplifted as often as possible.  Which I immediately forget to do.  I think I've changed the message maybe 3 times since then.
So I have decided to start a new tradition: Magic Chalkboard Monday.  I will write a message on the chalkboard, and share it here, and then you, hopefully, can be inspired and uplifted, too.
This week's Magic Chalkboard message*, via The Velveteen Rabbit, via the film Beginners. 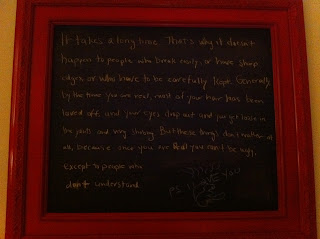 And because that's almost impossible to read, here it is the message (in full):
“What is REAL?” asked the Rabbit one day, when they were lying side by side… “Does it mean having things that buzz inside you and a stick-out-handle?”

“Real isn’t how you are made,” said the Skin Horse.  “It’s a thing that happens to you.  When a child loves you for a long, long time, not just to play with, but REALLY loves you, then you become Real.”

“Does it hurt?” asked the Rabbit.

“Sometimes,” said the Skin Horse, for he was always truthful. “When you are Real you don’t mind being hurt.”

“Does it happen all at once, like being wound up,” he asked, “or bit by bit?”

“It doesn’t happen all at once,” said the Skin Horse.  “You become. It takes a long time. That’s why it doesn’t often happen to people who break easily, or have sharp edges, or who have to be carefully kept. Generally, by the time you are Real, most of your hair has been loved off, and your eyes drop out and you get loose in the joints and very shabby. But these things don’t matter at all, because once you are Real you can’t be ugly, except to people who don’t understand.”
And here it is on the page, for the booklovers: 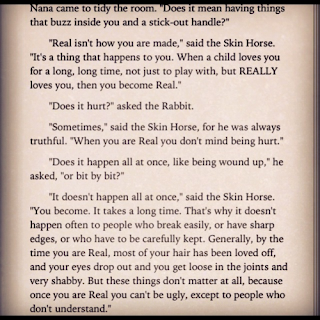 And because Beginners is a really, really good film, surprisingly inspiring and uplifting and not just because Ewan MacGregor is in it, here's another quote from it I loved:
"People like us: half of them think that it's never going to work out, the other half believe in magic.  It's like a war between them."
Which describes me pretty accurately. And reminds me how much I want to be of the second half.
Even though it makes me cry.
* The very faint message in the lower right-hand corner is from my brother, and I always keep it there.  Next to it is some kind of beaver or groundhog he drew - I'm not sure what it is but I keep it there too.