The Revenge of Mama Greek

Mama Greek loves babies even more than she loves church, and Peter was her first nephew within visiting distance to reproduce, so you can imagine what it was like: all Sasha, all the time. Sasha’s coming to visit in a week! Sasha grew a hair! Look what I bought Sasha! And indeed, thanks to Mama Greek, Sasha became the proud owner of 1200 or so miniature ruffled pink dresses, which MG ran around the house jiggling on little plastic hangers and making high-pitched noises at whenever Tony or Papa Greek were around.

As it happens, on the day Sasha was born, Tony and I had our first date. I didn’t get any pink dresses, but pretty soon a framed photo of me appeared on the wall next to one of Sasha. (It was actually a photo of me and my dog Ruble, whom Mama Greek would buy pink dresses for if she could.) I was the other new baby of the family. And I loved it.

Sasha grew into a ridiculously beautiful toddler, and Mama Greek lived for the days she could clutch her to her bosom and speak to her in Greek-English baby talk – which, incidentally, is the same way she speaks to Ruble. More photos sprung up in every corner of the house. There was Sasha, blinking adorably from amidst the lilac bushes. There was Sasha, giggling in her grandfather’s arms. There she was in her high chair, beaming through the muffin smeared all over her face.

My parents are divorced and I have one first cousin, so becoming part of Tony’s family was like landing in some kind of Nia Vardalos twilight zone. Sunday dinners… crazy, loud Christmases… holidays in the family apartment on the coast of Greece. And, yes, the food. The spanakopita. The tzatziki. The souvlaki. Cooked, packaged and loaded into the trunk of the car on every visit, and if we couldn’t make it over, it would appear, as if sent by fairy deliverymen, on our doorstep. Mama Greek hemmed my pants, pinched my cheeks, and told me at every chance she got that she’d prayed to God for me. Can you say healing of childhood wounds? Not only did I get the guy of my dreams, but I got the shit adored out of me by his parents. Yup. I’d won the Love Lottery Jackpot, and the bonus prize.

Eventually, Sasha started to walk. Much to our amusement, she used this opportunity to get as far away from Mama Greek as possible. Eventually the only way to get Sasha to come to anyone was by bribing her with chocolate. Hold out your arms and she’d zoom off in the opposite direction. Dangle a Hershey’s Kiss and she’d be your best friend. Guess what Mama Greek started buying in bulk at Zellers?

It was around that time that I began to notice: even though I still loved my mother-in-law, the novelty had begun to wear off. She was even – could it be? - starting to annoy me, what with all the worrying, and the food, the fawning, the food, the repeated advice on the importance of marriage, and the food. You’re thinking, “Oh, cry me a river. And pass along some of that spanakopita while you’re at it.”

But picture this scene at the dinner table:

Me: I already have some, thanks.

Now picture it happening every five minutes, with every item on the table, including salt. Mama Greek doesn’t speak English perfectly, and she often says, “I love you too much.” It couldn’t be more true.

And then, last summer, Tony and I got married. And a few months after that, the thing I was sure wouldn’t happen, happened. We were celebrating an aunt and uncle’s fiftieth wedding anniversary at a restaurant in Laval. Raising our glasses to toast half a century of marriage – no small feat, I’m sure you’ll agree – we clinked and yassou’d and wished them half a century more. And then Mama Greek leaned across the table and said to Tony and me: “Now you two, get busy.”

I was speechless. Only once, long ago, had she hinted at anything of the sort, and Tony had ordered her never to do it again. She’d never used a turn of phrase like - ew - “get busy”. I didn’t know whether to gag or order myself a pitcher of tequila.

“Still not pregnant, Natalie?” MG continued. “Why not?”

Fortunately Tony jumped in and saved the day, while I downed my drink and tried to forget it had ever happened.

“She won’t do it again,” he promised, later. “She had half a glass of sparkling wine. It was a slip-up.”

But the following weekend, Mother’s Day, we raised our glasses, and Mama Greek announced,

“I hope next year there will be another mother at this table.”

And that’s when I wanted to get as far away from Mama Greek as possible.

It never occurred to me that when I got whole new set of parents, I’d relive my childhood all over again in fast forward. And the sad thing is, since my first teenage rebellion against my actual birth parents was pretty lame, I’m actually getting some satisfaction out of doing it again. But even as I dress in my skinniest jeans and ugliest top before seeing Mama Greek – a weak attempt to quell her fawning as well as any illusions she might have about the state of my uterus – I’m aware that it’s all a bit ridiculous. Why am I so angry at this poor, innocent Greek lady who just wants to feed me and love me?

But that’s the thing. Sasha got bigger… and smarter. Now, even her little sister Alexa, who served as a convenient stand-in for a while, can run away. MG just wants someone to squeeze and love too much and buy pink dresses for. That ain’t me. But I’m the one who can give it to her.

It’s the oldest power-struggle in the book: mother-in-law vs. daughter-in-law. And it’s yet another thing they don’t warn you about in Martha Stewart Weddings. But the problem is, unlike Sasha, who’s moved off chocolate and onto cold, hard cash (I spotted MG hand her a fifty last Christmas when she thought no one was looking,) I have to face up to the situation - and wearing tight clothes and drinking too much at family gatherings, tempting though it may be, isn’t going to cut it. I have to tell my mother-in-law that making baby comments in public is going to achieve the opposite of its desired effect.

It’s not that I don’t want to be a parent. But I don’t want to be one yet. And to be the vessel for someone else’s happiness is a lot of responsibility – whether you’re 3, or 33. But I have to move on from the teenage years, at least when it comes to Mama Greek. I’ll let you know how it goes. Or maybe you’ll run into my kid and me in the park one day. We’ll be hard to miss. She’ll be the fat one, her pockets full of $50 bills. 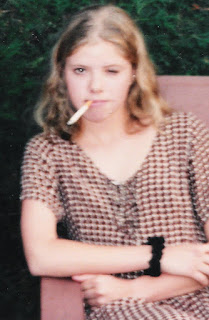 (photo: author as teen, Round One)
2 comments:
Newer Posts Older Posts Home
Subscribe to: Posts (Atom)
*With thanks to Where the Hell is Matt, who inspired me and so many others by dancing badly around the world several times. And okayed me riffing on his URL. If you haven't already, check him out.
Who the hell is Nat? More about me over here.