if you're looking for me...

Ever since I’ve been part of that wonderous thing called “media”, I try to go to fashion week. I can’t tell you why. Maybe it’s the accumulation of two decades of flipping through Vogue and Elle, wishing I were cool enough to be accepted into the world of style. Maybe it’s the 4-year old in me who still, despite her best efforts, gets excited about dresses. All I know is that every time I go, I find myself mentally sizing myself up against every single woman (and most men) in the room, wishing the Lord had seen fit to give me more hair, bigger eyes and much bigger boobs. Which is not an enjoyable way to spend an evening, by anyone’s standards.

This year, I tried to do things differently. In other words, I tried not to try. I did my best not to fall victim to Lying Awake for Nights, Mentally Analyzing What in my Closet is Remotely Worthy to Wear Syndrome. When I got to the first show and realized I had a maple taffy stain on my coat, I tried to be okay with that.

“Own that maple taffy stain,” I told myself. And, mostly, it worked.

I squeezed into my seat, between a man in a knee-length, sleeveless fur coat and a women encased in leather, and thought: these are clothes. Face paint. Things you put on your feet. It’s a privilege to be able to indulge in caring about what we look like, yet the general consensus of fashion media is that the future of human civilization hangs in the balance because Andre Leon Talley has declared a “famine of beauty”. If you were an alien who landed at Fashion Week, wouldn’t you wonder: who are these angry, hungry-looking people with pointy hair? And why do they look so miserable?

And so, for the first time in Fashion Week history, I had fun. I went to the shows, then I went for souvlaki. (I had to. The only things being offered on silver platters by the Fashion Week cocktail waitresses were miniature cosmetic samples.) I got some tzatziki on my coat, just to balance things out. That was Day One.

Day Two, after shoving my aching toes into every pair of shoes I own, I wore sneakers. To Fashion Week. I decided this was a good sign. This was what they called “spiritual evolution.” Plus, I was going to see Katrin LeBlond’s show. I’d interviewed Katrin for her recent spot on All in a Weekend on CBC radio, and knew this was a woman who embodied everything I love about fashion. She would be using “real” women on the runway, because she refuses to show her clothing on a body smaller than a size 6, a request most modeling agencies can’t cater to. One of her models was even going to be (gasp!) “plus-sized.” Another would be in her seventies, with long, grey hair. I’d been to Katrin’s store numerous times, and knew she strayed from the norm, eschewing the new and old black for brilliant colours, ruffles and fairy wands. When I was four years old, these were the kinds of clothes I dreamed about wearing when I grew up. 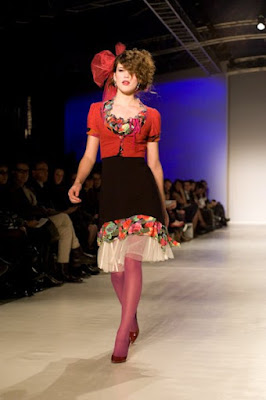 Much to my excitement, I ended up in the front row. (I know, this ain’t London or NYC. But I get my kicks where I can.) Feasting my eyes on the row of glamazons opposite me, I spotted, draped over a man in a very expensive-looking suit, a Heidi Klum look-alike. I must have stared a bit too long (she really did look like Heidi and my brain does funny things sometimes), because eventually, the girl sitting next to her, who was tanned and wearing thigh-high PVC boots, turned and stared back at me. No, not stared. Threatened. I didn’t know there was a facial expression for, “Don’t be resting you un-Guccied eyes on us, girlfriend.” But there is. And she had it down.

I was so shocked, I couldn’t turn away. People do that? I thought. For real? It was like a Fashion Week urban myth come to life. So the stare-down continued, our eyes burning holes into each others’ retinas, my opponent shaking her head to support her point, my mouth wide open in disbelief. It is possible my face caught fire. I was too stunned to notice.

I wish so badly I’d had the courage to keep it up. To show her there’s a facial expression that said, “Girlfriend, take your ‘tude and stick it up your Dolce and Gabbana.” But after what felt like a year, I looked away. I still smiled till it hurt, refusing to let her get the best of me. I clapped extra hard when the seventy-something woman came out and bowed to the audience, as if to dare my new enemy to even think something catty.

But inside, I was physically restraining myself from running down the catwalk, jumping over the photographers at the end and bursting into tears. I felt awful. I hated Fashion Week more than ever before. Hated it. Hated fashion, period. I was never, ever, going to care what I wore again. From here on in, I’d only leave the house in garbage bags. Except even that would look like I was trying to make some kind of statement. So what to do?

I wish I could tell you I had some epiphany, and then skipped home from Fashion Week gleefully in my sneakers. But I didn’t. I left sad, tired, and jaded. I babbled to myself on the metro, about how Evil-Eye must be of those truly miserable people, who wakes up every morning hating herself. It was the only thing that made me feel better, and not much better, I might add.

And that was the difference. Only that. I still felt small and frizzy and eternally uncool, and if that if I just had gazelle thighs and 34Cs my life would so much better. But at least see how funny that was. Not just that Bride of Frankenstein had felt it her duty to inform me of my “place” in the couture food chain, but how quickly I reacted to it. How I wanted to have her run over by a Toyota. How Fashion Week still gets to me.

I will admit I’m not counting down the days until Spring/Summer 2011. But in the meantime, I propose a new kind of celebration. Let’s call it “Fashion Freak”. Join in whenever you want, whether you’re wearing a fuschia ballgown, or jeans and sneakers, or your most maple-taffy-stained pyjamas. Walk the catwalk your way. Show off what makes you different. When you feel like you’re not enough, laugh at yourself. It’s the only thing you can do. And applaud everyone else who does the same.

Otherwise, so help me, I’ll have to get my fairy wand out on your ass.
3 comments:
Newer Posts Older Posts Home
Subscribe to: Posts (Atom)
*With thanks to Where the Hell is Matt, who inspired me and so many others by dancing badly around the world several times. And okayed me riffing on his URL. If you haven't already, check him out.
Who the hell is Nat? More about me over here.