It might be a small understatement to say that these are not words one hears every day. Especially from one cell phone to another, over the Atlantic, across 5 time zones and originating from under an umbrella on a rainy street corner in the middle of Leicester Square. But my lucky friend Emily had just that opportunity, and the phone call (if you haven’t guessed) came from me.

Aside from the immensely life-changing experience of seeing, live and in the flesh, my teenage heartthrob in his skivvies (not to mention on stage performing in the incredible One Flew Over the Cuckoo’s Nest), this phone call was a very significant one. Why? Because it came at the victorious end of the first time I have ever celebrated a birthday really and truly alone.

This is not a request for sympathy, by the way. As a matter of fact, I think that there should be a special agency – non-governmental, if it must be – that distributes medals and badges of honour and bravery for going out by oneself. Your first, smallest trophy could be for the First Movie Alone. I know some people are old hat at this, and spend many a glorious Wednesday night or Sunday afternoon (or – gasp! – Saturday evening) happily not sharing their popcorn, laughing loudly at all the wrong bits and bawling their eyes out shamelessly while the credits roll. But I know far more who have never done it. And to them I say: I understand. It’s a daunting thing.

Of course, it’s not like there was some kind of massive social birthday do on somewhere in my honour, and I simply walked straight past the balloons and confetti and onwards to spend the night with Christian. London, as I’ve said, is a tough place to get to know people, so my spending my Birthday Friday Night out alone was not completely by choice. I did get to celebrate the actual big day with the magnificent Tegan – at the Maple Leaf Pub, no less – drinking Moosehead beer and eating poutine and revelling in the abundance of Australian wait staff and English clientele. 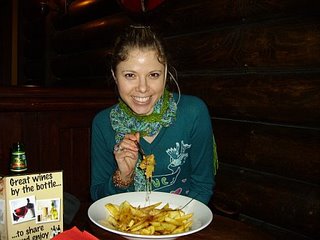 But when it looked like Friday was going to be birthday party-free, (and you can ask people who know, my birthday has historically been a week-long event), I decided to grab the bull by the horns and make the most of it. Or so I thought.

In fact, wandering through Covent Garden on a beautiful Friday evening was not as inspiring as I would have hoped. There’s only so much window-shopping one can do (an activity best done alone, in most cases) before it comes time to do have to do that annoying thing called eating so as not to starve and take away from the enjoyment of Mr. Slater. The more I wandered through the streets and stared into restaurant windows, the more I wondered what exactly I’d been thinking. This was not a good idea. This was an utterly ridiculous idea. I could not possibly go into one of these candlelit places, teeming to the brim with lovey-dovey couples and happy families, and ask for a table for one. It seemed about as much fun as jumping off a cliff.

Eventually my appetite took over my brain, (which is usually how I operate anyway,) and I realized it was do or die of hunger. As luck would have it, at that very moment I turned a corner and came upon the glorious sight of an Ed’s Easy Diner. Home of, in my opinion, the best malt milkshake known to humankind, and possibly extra-terrestrial life as well. Ed’s is brightly lit and kind of tacky and not exactly what you’d call fine dining. In other words, it was the only restaurant in Covent Garden that was half full on a Friday night.

I took a deep breath and went in. The cheerful (i.e. Australian) waiter kindly offered me any table in the house. Wishing to the gods I’d thought to bring a book, I sat by the window, and ordered.

And then it hit me. I could either wish the rest of my Birthday Friday Night away – and it’s not every day a girl turns 29 in London – or take what was given to me and make the most of it. So I sat up straight, turned towards the street, and got lost in watching the world go by.

Eventually the doorman (because doesn’t every diner need a doorman?) and I struck up a conversation. Thrilled at having a real live person actually talk to me, I informed him excitedly that I was going to see One Flew Over the Cuckoo’s Nest, starring (did I mention) Christian Slater. Ah yes, he said, nodding thoughtfully. He thought he remembered him from back in the 90s. We went on to discuss the merits of not wanting to understand Shakespeare, and when I left, he wished me a very good night.

Which, as you can tell from my post-performance phone call, it was.

This is not to say that I’ll never feel weird or awkward again about eating alone or going to the movies solo. Our world, it seems, has a great big hole when it comes to the encouragement of doing things without company, and it’s been ingrained into us from every direction. Try to book a solo vacation – or even rent a hotel room for one online – and you’ll see what I mean.

Some of my worst traveling moments were when I wished with every fibre of my being that I had someone to talk to. (Especially in Frankfurt – never go to Frankfurt alone.) Sometimes, like green tea or anything else that’s good for you, it stinks. But I still maintain it’s a great and important thing to do once in a while. Which could be why I’ve just booked a ticket to Verona, Italy. A hotel room alone is way out of the budget, so I'll be staying in a convent! But you never know what you might learn from a nun.

And tonight, Friday night, my plans have just fallen through. But I think I hear a large popcorn and Romance and Cigarettes calling my name. It’s a musical, but that’s okay - no one has to know. Plus I won’t have to share my gummy coke bottles with anyone. And that, alone, is worth the price of admission.