Just Smile and Give Them a Vegemite Sandwich 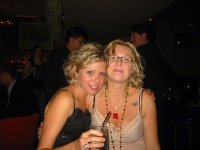 I have to admit I never really got that whole thing about the meek inheriting the earth. But I have no doubts as to who’s going to inherit Europe. That, my friends, will be the Australians.

They’re everywhere. No, I mean really, everywhere. Anyone who’s backpacked in Europe knows that you generally meet more Australians than anyone else, no matter if you’re in the depths of a medieval dungeon or on the top floor of the chichi-est shopping plaza. The sheer numbers of them are overwhelming, and I know I’m not the first to ask, but I really want to know: are there any actually left in Australia?

I stayed in Prague for 6 nights during the start of my travels and for 6 nights they filed, continuously, in and out of my hostel room, until I started stopped saying “hello” completely and just said “g’day”. Here in London, I live with six of them. Not that that makes me an authority, but as the sole non-Australian in the household, I think it’s fair to say I’ve made a few interesting observations.

I would never lump all Australians into one category, nor would I dis the Ozzie race – far from it. They come in all shapes, sizes and varieties, and if you’re going to grant them any general characteristics, they’d have to be: easygoing, fun, and full of a joie de vivre that could only originate from a place where 21 degrees is wintertime. As it comes time for me to move out of Little Australia, though, I feel I should shed a little light on the strange habits I’ve observed after spending with these folks from down under.

Let’s get the obvious out of the way right off the bat: yes, they can drink. My god, can they ever. I think that to your average Ozzie, beer is kind of like oxygen – they simply take it in out of sheer necessity and don’t really consider an alternative. Occasionally they drink other things, like wine. But the beer inevitably returns. And so, they have tolerances like cement trucks, leaving yours truly well out of the running when it comes to a night out.

They also seem to be curiously shameless about being seen in public in only their underwear. I am referring to male Australians at the moment as I’m not sure if this applies to the women, but I think overall it must have something to do with spending the majority of their lifetimes in their togs/bathers/cozzies (swimsuits), being healthy and bronzed and, in general, annoyingly good-looking. I’m not talking just boxers here by the way folks: briefs, shorts, tighty-whities – the Aussie has no shame.

Getting back to the different ways of saying things, spend some time with an Australian and it will become clear to you that living that far away from the rest of the English-speaking world has obviously done a number on their language. I can’t count the number of times I’ve stopped dead in the street while talking to my roommate Tegan, whether out of sheer confusion or simply not being able to stand up because I’m laughing so hard. We once made an omlette and our cheese went “walkabouts”. Her handbag is heavy from carrying too much “shrappy”, so we have to go to an “F-Pos” to get out some money. We have to have a "D & M", but we need to get a good “pozzie” when we go to a restaurant, and make sure the salad has no “capsicum”. But if it does, it’s not much of a muchness. She won’t cark it, she just doesn’t like them. Uh huh.

Every single Australian I’ve met (and I’m open to any and all comments on this matter) is also curiously partial to spray deodorant. I don’t know about you but I thought that stuff was outlawed in the eighties with acid rain and acid wash jeans. But they all have a bottle, the Australians, and they all use a healthy dose of it every single morning. No one’s complaining about nice-smelling friends but it’s a bit difficult to be lying in your bed at 7am, still recovering from having tried (and failed) to keep up with them the night before, and then suddenly gasping from the “Ocean Breeze” that’s just filtered through your covers. Not the best hangover cure, I’ve found.

So I will shortly be saying farewell to my Australian flat, and may I just say thank god. But that’s because it was dark, old, musty, dirty, cramped, horrible, and alternated between freezer and sauna-like on any given weekday morning – not because it was Australian. As a testament to this I will be bringing one Ozzie with me: the famous Tegan, who I met, believe it or not, in a hostel room in Athens four big months ago. She was my lifesaver then and still is now, whether in underpants or fully clothed. And she always smells good.

(Post-D&M photo courtesy of Ben Stix)
2 comments:
Newer Posts Older Posts Home
Subscribe to: Posts (Atom)
*With thanks to Where the Hell is Matt, who inspired me and so many others by dancing badly around the world several times. And okayed me riffing on his URL. If you haven't already, check him out.
Who the hell is Nat? More about me over here.