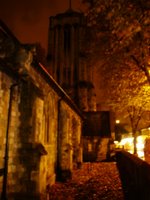 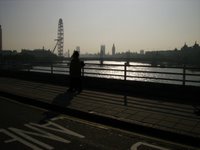 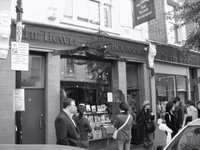 I’m proud to report that after living in London for only two months, I’ve got myself a new set of wheels.

I had no choice, you see. Taking the tube to work - and then taking the bus when the tube started to really get to me – was giving me too much time to think, about London, and about my strange love affair with this city.

When I first got here I was doing a lot of job interviews in central London. So I’d take the scenic 94 bus, which goes past Holland Park (posh) and Notting Hill Gate (Hugh). One evening there I was, wearing my suit for the third straight day in a row, sitting on the top deck of course and staring dreamily out the window. I felt like I was living in some kind of movie world – and not just because of Hugh, who I haven’t even had dinner with yet. I just couldn’t believe I could simply get up and walk to Portobello Road, or TopShop, or even Buckingham Palace should I choose to hang with Her Maj.

And then the bus veered sharply and the girl standing next to me fell straight onto my foot with her stiletto.

That’s pretty much it. I think that London, as far as cities go, is a player. It charms you, flirts with you, plays hard to get with you. Milliseconds later, you find yourself in bed with it. It teases you with magical things… accents… that great, dry, British sense of humour… charming rooftops, quaint parks and shops you could only dream of. And then, just as you’re falling for it, it takes out its pointy shoe and stomps all over you.

Having hit the two-month mark as a London-dweller, although the initial lust has worn off, I still find myself in various states of amazement. All those street names and tube stops and parks I see every day are no longer the things Rolling Stones lyrics and Monty Python sketches, but part of my daily existence. The first Sunday I was here I got to see the city from the back of a motorbike – and it’s remained my favourite thing to do ever since (even more that shoe-shopping, believe it or not.) And of course there’s Portobello Market, crammed with more funky antiques, crazy clothes, cheap Thai soup and hangover-cure pastries than one person can reasonably take in.

But at that same time, I share a home with six Australians. I adore them, by the way – and I know that one day I’ll laugh at the stories of our falling-apart house with the “pet” mouse in the kitchen and the velveteen couches circa 1969. But thinking back on my lovely two-bedroom pad in Montreal on the Plateau, I do sometimes wonder...

And then, there is the London Underground. The Tube. I can’t believe I ever once complained about taking the Metro to work in Montreal in the morning. It is a pristine, royal chariot in comparison to the experience of standing, literally crushed, amongst throngs of angry English people, literally growling at each other, on a train that stops 10 or 15 times between stops. The trains change direction or destination simply on a whim, leaving you stuck beside the tracks and waiting until three more go by before you can squeeze yourself on another one and arrive at work an hour and a half after you left your house. And the tube lingo, combined with some of the station names, is almost a dialect in and of itself. How does “alight” mean get off a train? When I landed here and took the tube from Heathrown, I thought the flashing message “This train is for Cockfosters” was a practical joke being played by some football fans.

So now, as a Londoner, I’ve found an alternate form of transportation. It’s flash, it’s silver, and I get to work on it in half an hour. Although riding a bicycle on the wrong side of the road, surrounded by insane black cab drivers and crazy scooterists, is what some would call terrifying; it’s also probably a faster way to wake up in the morning than, say, tea. Oh yes, I’m often passed by these pro bikers: blazing, geared-up dudes with bright yellow jackets and fancy pants and bicycles worth more than any car I’ve ever owned. They look upon me with disdain. But I can still eat KitKat Chunkies and Cadbury Flake bars, and that’s what matters.

And of course, I’ll continue my love affair just a little bit longer.