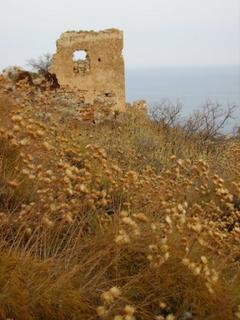 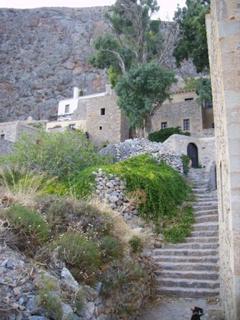 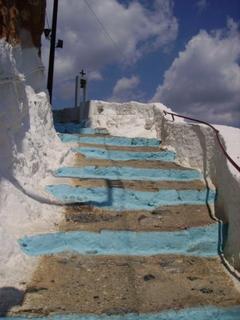 I know it usually does, and I also know that a lot of people share the same opinion of Athens: loud, dirty, and overrated. But I think seeing Athens - and then seeing the rest of Greece - is a kind of metaphor for the whole experience. It's a whole pile of opposites on top of each other. And you have no idea just how much until you get to the end.

When I arrived in Athens, I went to my hostel,unpacked, changed, and went out to get some food. After walking for about 3 minutes, I turned a corner, and came face to face with the Acropolis. There it was - just sort of casually sitting in the midst of this cosmopolitan city - cafes to the left, shops to the right - a sight so old and so familiar even to those, like me, who have never seen it before. I stood and stared for what seemed like hours.

And that's how I began my month in Greece. It was a string of experiences so unbelievable - and each so different from the next - that I could not have dreamed it up if I tried. So, begging your patience (and pardon for not having written since Austria...), I will share with you Greece in Two Parts. Or maybe Three.

After Athens, I got the opportunity - for which I am so grateful - to experience a road trip not only in Greece but in the beautiful and untouristy Pelopponese region, which runs along the South of the Greek mainland. If you've ever done a road trip, you know the deal: basically, living in a car and breathing the same air as your fellow travelers for days on end. A sort of microcosm develops: road trip names, one-liners, even foods that become part of the lifestyle. Even better, our tour guide was a Greek-speaking Canadian friend with a family so huge and welcoming that by the end of a week I felt I was one of them.

Not only did I become Greek as we drove through the Pelopponese but I also acquired the nickname of "Snake", which came from a combination of stories best left for another time. Snake spent 3 nights in a villa on the side of a mountain in a village of 20 inhabitants. She saw a monastery built into the side of a rock cliff. She swam in 3 different beaches one day, and walked, mouth open in awe, through the winding, narrow streets of Monemvasia. She ate the most incredible things: french fries that would make any potato green with envy, cooked in olive oil that rendered her weak in the knees... bread freshly baked in a stone oven... grapes picked from the roof outside the kitchen... warm goat's milk first thing in the morning. It's a testament to how good she was feeling that she was still willing to appear in a bikini in public.

But all good things must come to an end. So, one week later, Snake, Leaner and Coco returned their car, joined another friend and took a ferry to the legendary island of Mykonos.

I say legendary, of course, not because of any beautiful Greek myth of gods and centaurs and magic fruit, but because Mykonos, as anyone who's been there knows, is insane. You start living a life you never dreamed you were capable of... spending days on end being utterly sleep-deprived and surviving only on a steady intake of giros pita and 10 Euro cocktails. You start doing things completely out of character, like dancing on bars (twice). You don't blink an eye at sights such as, just to pick an example completely at random, the guy in a g-string with a horse head over his best bits who dances at the beach bar every night starting at 5pm. You watch with mild disinterest as you sit on your chair on Paradise Beach and people saunter by, completely nude except for a pair of giant headphones.

I actually had a great time on Mykonos. How can you complain about having a drink by the sea with your feet hanging off a dock, and having to jump up to escape the occasional crashing wave? You can't. Unless you're my liver.

Not only that, I had to get to Santorini. It was the place I'd wanted to see in Greece (yes, after watching The Sisterhood of the Travelling Pants during a lunchtime matinee on my last day of work). If only I had known where I would go from there...